Old North St. Louis represents one of St. Louis' great success stories in the last twenty years. Once a rapidly declining neighborhood full of blight and abandonment, Old North was one of the few areas of the city to see its population grow in the 2010 census. Located just a fifteen-minute walk from downtown on North Florissant Avenue, the neighborhood has benefited from a resilient population and stalwart businesses such as Crown Candy Kitchen.

See also: Chuck Berry's St. Louis Homes Before He Was Rich and Famous

The Old North St. Louis Restoration Group has also figured prominently in Old North's rebirth. For decades the nonprofit has rehabbed historic buildings, some dating back to before the Civil War, while simultaneously partnering with Habitat for Humanity to build new construction. The largely abandoned Fourteenth Street Mall, once the center of the neighborhood, has seen massive redevelopment at the hands of Rise Community Development and ONSLG, which now houses its offices on the newly renovated street. 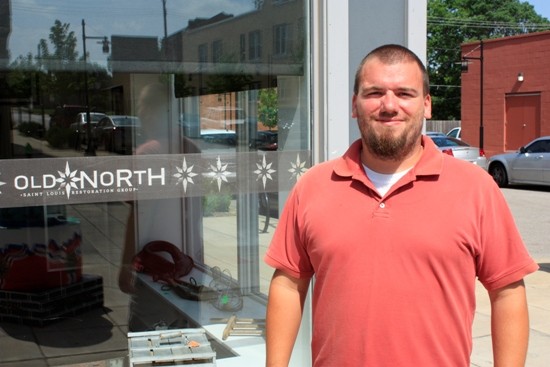 But despite all the hard work, many buildings still await redevelopment and are slowly crumbling. In addition to his regular duties as community development specialist for Restoration Group, Matt Fernandez has taken up the additional task of saving a beautiful 100-year-old house at 1316 N. Market, just down the street from his own home. Fernandez's passion comes through when talking about why he both lives and works in Old North.

"I love everything about north St. Louis: the history, the architecture, the community," he says. "People love a good rebound story about revitalizing a community. We're rebuilding this community brick by brick."

The current state of the house Fernandez seeks to save on behalf of Restoration Group will indeed require some "brick by brick" reconstruction. To the casual observer, the building looks like it could topple over with the slightest tremor. Once inside 1316 N. Market, one questions the wisdom of standing near the building, let alone entering it. But Fernandez is undeterred:

"Our experience shows that nothing is really beyond repair. The demolition cost would be very high because of the adjacent structures. It makes as much sense to stabilize the house than to have a vacant lot or building something new."

Fernandez knows a thing or two about facing daunting odds in the reconstruction of seemingly doomed buildings. His own house, which he and his family are currently rehabbing, suffered a devastating collapse during a wind storm several years ago. Yet despite the challenges Fernandez persevered and completely restored the damaged portions of his home.

Working with architect John Wimmer, Fernandez now has assembled a redevelopment plan for the 1316 N. Market, which suffers from many of the same challenges that his own house once faced. Dubbing his effort a "Brickstarter" campaign, he is seeking to raise enough funds to stabilize and partially rebuild the house. Reconstruction is already under way, and some of the most serious structural problems are now fixed. Once stabilization is complete, the house will be available for purchase with proceeds going toward saving additional buildings in the neighborhood.

Fernandez and ONSLRG hope to raise $25,000 in donations, and they have already arranged more than $5,000 to fund the ongoing critical stabilization work on the house. The group will also accept less conventional donations. As Fernandez put it last week, "building materials are just as good as money."

Why spend so much time and trouble on a single house? Fernandez aims to make a broader statement by saving 1316 N. Market: Just think, if several thousand people each adopted just one house apiece and put their passion and time into saving it, St. Louis would see fewer senseless demolitions. Much of the city's historic built environment in north St. Louis faces an uncertain future, and grassroots efforts -- such as the Brickstarter -- may be its best hope for preservation.