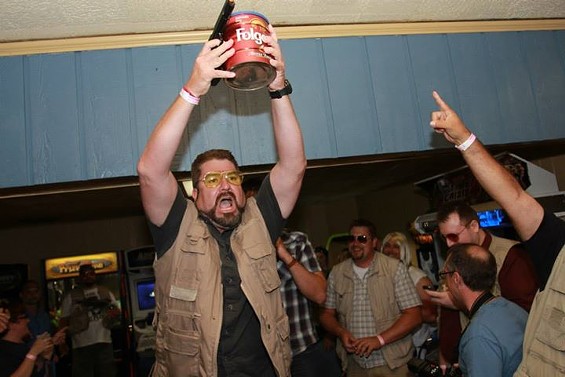 If all goes according to plan, tonight's The Big Lebowski-themed shindig on Cherokee Street will be the start of a citywide, all-Lebowski festival here in St. Louis.

"St. Louis is ready," says Marcus Bautista, who won the award for best Walter Sobchak costume at New Orleans' Lebowski Fest last year. To have a good time, Lebowski fans just need plenty of booze, a place to watch the movie and some quality bowling lanes. "I think this is the perfect town for it."

Bautista and the staff at Yaquis on Cherokee are throwing a dude-worthy party Tuesday night to kick off their campaign to bring Lebowski Fest to St. Louis. Die-hard fans from around the country are coming by in Lebowski-inspired costumes to help serve Caucasians, quote the movie and sell "St. Louis Abides" T-shirts.

"This is what St. Louis does just with the idea of bringing the fest to the city," Bautista tells Daily RFT.

Bautista hopes the party and T-shirts get River City on the radar of Will Russell, one of the founders of the annual, epitomic Lebowski event in Louisville, so organizers will schedule one of their satellite fests here.

"It's great for the economy, it brings a lot of people in from out of town," says Bautista. "It's a lot of people's only chance to see that city, and they're the kind of people who grab hold of life and want to experience it to the fullest."

So far, the mobile festivals have stayed on the coasts, so St. Louisans want to be the first to bring the event to the Midwest.

"It's about time we get [a Lebowski Fest] in the heartland," says Joe Timm, manager at Yaquis. "Our goal is to get a little bit of attention for St. Louis and in the meantime have some fun."

St. Louis is where Bautista discovered just how much he looks like John Goodman, who grew up in south St. Louis County.

"People kept saying, 'You have to dress up as the best John Goodman character ever, Walter Sobchak,'" the dude's ever-loyal, gun-toting best friend, Bautista says. He dressed up for the first time at Midwest Mayhem last year. "The response was just incredible. It was just the funnest night.... I guess I jumped into it with both feet."

Since then, Bautista has traveled to Milwaukee and New Orleans, but he dreams of hosting the festival in the city he's called home for the last five years.