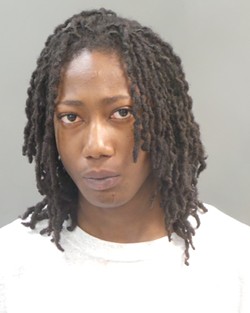 A St. Louis Metropolitan Police officer with more than twenty years on the force shot an armed teen suspect in the leg during a drug investigation Wednesday night, according to police.

The Circuit Attorney's Office charged Tyre Boyce, 18, with unlawful use of a weapon for pointing a firearm at two officers who were investigating drug sales in the Carondelet neighborhood.

Police say Boyce was in the rear of a blue Dodge Neon on his block, the 6700 block of Vermont Avenue, when police approached around 8:20 p.m. to investigate a call about suspicious people selling drugs from the car.

As police approached, Boyce ran from the car with a gun in his hand, turned back toward the officers and pointed the gun at them, according to the police report. A 46-year-old police officer shot multiple rounds from his department-issued weapon and stuck Boyce in the thigh.

Police say Boyce kept running with the gun in his hand even after getting shot, fleeing into a house on the block. He soon left the house without the gun and was arrested and taken to the hospital without incident.

By the time police got back to the blue Dodge Neon, the rest of the suspects had scampered.

Boyce is in stable condition, and he is being held on a $30,000 cash-only bond. His aunt tells Fox2Now Boyce was involved in a neighborhood dispute, not drug deals, when police approached him.

Here's the report from police:

Officers were investigating a call for suspicious persons involving drug sales in the 6700 block of Vermont originating from a blue Dodge Neon. When officers located a vehicle matching this description and approached the vehicle, the rear seat passenger suddenly exited and began to flee on foot. The officers observed the suspect holding a firearm in his hand. The suspect then turned toward the officers and pointed the firearm at them. Victim #1, in fear of his safety and the safety of his partner, drew his Department-issued weapon and discharged rounds, striking the suspect in the leg. The suspect continued to flee while armed and entered the residence in the 6700 block of Vermont. The suspect then exited the residence unarmed and was taken into custody without incident. The suspect was conveyed to a local hospital and treated for a gunshot wound to his thigh and listed as stable. The suspect vehicle was located unoccupied. There were no officers injured in this incident. As a matter of department policy, the officer who fired gunshots has been placed on administrative leave. The investigation is ongoing.