How to Feed Your Soccer Addiction in St. Louis When the World Cup is Over

So you're a St. Louis sports fan.

You celebrate Opening Day at Busch Stadium like it's a holiday. You know that #LGB stands for "Let's Go, Blues!" (Not lesbian, gay and bisexual). You may even root enthusiastically for the Rams, which makes you dedicated indeed.

But then came the 2014 FIFA World Cup, and something about Tim Howard's miraculous saves, America's dedicated "I believe" chant and Teddy Goalsevelt's very existence is turning you on to soccer like a college freshman experimenting sexually for the first time.

Could you be soccer curious?

Daily RFT has great news for you, newbie: There's even more where that came from.

The U.S. men's national team may be knocked out of the World Cup, but the soccer doesn't have to stop. Here are three things you should do if you've been bitten by the soccer bug:

The U.S. national team players you've been cheering for play on other teams the rest of the year. Both Tim Howard and Jozy Altidore play in the English Premiere League, for Everton and Sunderland, respectively. Captain Clint Dempsey kicks it stateside for the Seattle Sounders.

If you've loved watching these guys play while knocking back a brew or two, don't let the end of the World Cup stop you. First, pick a team to support. (If you can't decide, here are some quizzes for the MLS and the EPL that can help.) Then, find your local soccer bar, maybe from this list of Riverfront Times' favorites. It's that easy.

2. Join the American Outlaws. If you want to see more from our nation's men's soccer team, the best way to show your support has to be joining the fanatical American Outlaws, the grassroots fanbase that's helped soccer sweep our nation. These folks have a die-hard love for the game and for their team, decking themselves out in stars and stripes and roadtripping to nearby games.

The American Outlaws meet up at St. Louis' premier soccer bar, the Amsterdam Tavern. A membership fee of $24 gets you a t-shirt and a bandanna.

3. Root for a local soccer team. 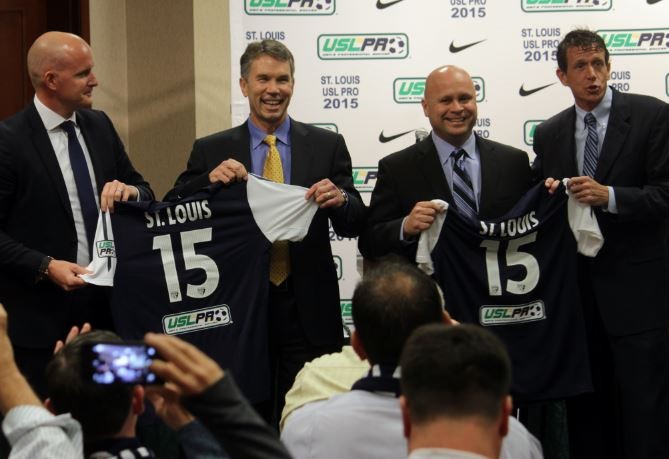 St. Louis may not have a Major League Soccer team, but there's still plenty of soccer happening here.

The biggest news in St. Louis soccer recently is that the city is getting a professional United Soccer Leagues Pro team, a third-tier professional team that will tie us closely to a current MLS team. The newly-formed team is called the St. Louis Football Club, or STLFC for short. If STLFC can succeed here, it could be a sign to the MLS that St. Louis could support a top-tier team.

Update: And those are just your outdoor options. St. Louis also has a professional indoor soccer team, the St. Louis Ambush, which plays in the Family Arena in St. Charles. An indoor arena means the ball goes out of bounds less often, picking up the pace of the game.

Want to see how the Ambush play outdoors? They'll play an outdoor exhibition game at the Soccer Park in Fenton on Saturday, August 9 at 7:30pm. Tickets are available for $10 each. Fans can purchase tickets by calling the Ambush office at 636-922-2255.

And if you're going to start rooting for one of St. Louis' local teams, consider joining the St. Louligans. Just like the American Outlaws in No. 2, the passion of these dedicated fans can make any soccer game fun.

The @Amsterdamtavern is already filling up. If you can't get in head to @ItapSoulard for the secondary party. pic.twitter.com/F7tj4lmEiS

No matter which team you decide to root for -- be it a local team or an English Premiere powerhouse -- just know you're joining a sports movement with deep roots here in St. Louis. Welcome to the beautiful game.