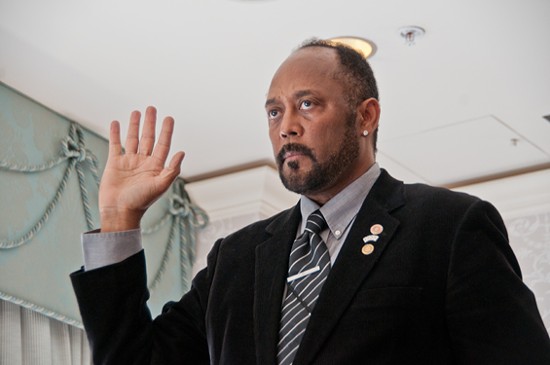 "It is my duty to govern with mission and unity," he continues, "to expound the law, to obligate neophytes and to instruct in the mysteries. By the power invested in the presiding officer of The Society of American Magicians, I now declare open and ready for business this regular meeting of the Society."

"To the honor of our most illustrious," intones an audience of roughly 120 other magicians. Little has changed in the Masonic-style rituals of The Society of American Magicians since its founding in 1902, but this year's annual convention, which happened to be held this week in St. Louis, was very different: At the Thursday meeting's conclusion, Sanders passed the national presidency of the Society to Kendrick "ICE" McDonald, the first African American to ever hold the position.

"At first, I said to myself 'Wow! I'm the first person of color in a 112 years,'" muses McDonald after the induction ceremony. The San Diego native has been performing magic professionally for more than three decades. 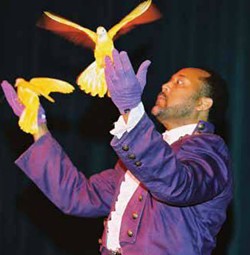 Though he hasn't reached the level of, say, David Copperfield or David Blaine, McDonald is a world-traveled performer, best known for his bird illusions and stage outfit, which conjures the image of a swashbuckling pirate with a thing for purple. He's served in various official positions in SAM for the past three years.

His love affair with magic started he was ten years old, when his father, a Baptist preacher, bought him a magic kit from a second-hand store. The kit was missing pieces.

"I had to figure out how to work these tricks without instructions," he says. "I didn't learn the traditional way."

It also wasn't very traditional for a black kid growing up in religious household to pursue an interest magic. His father forbade singing and dancing outside of church services. McDonald says that many of his church-going friends and family members considered his interest in magic somehow "dark," a violation of the Biblical admonishments against sorcery.

"I was like the step child, the dirty little secret," he recalls of those days. His family's and friend's opinions changed, however, once they saw him on stage.

"My thing is to get the most skeptical person in there and do something to make them smile. Then you have everybody. They just have to know you're not doing anything satanic."

Nowadays, McDonald says there's been a quiet resurgence of back magicians. Yet it's an uphill battle to attract the youth, and all the more difficult since the great African American magicians of the early and mid 20th century -- like Black Herman and Fetaque Sanders -- are hardly remembered outside of the magic community.

"I think exposing the young African Americans to what theater is and what the art forms are would assist in showing them that the magic works," he says. That's one the goals he hopes to tackle during his year in office.

McDonald isn't the only performer trying to reestablish the legacy of African Americans in magic. Ran'D Shine, a youthful-looking Philadelphia magician in his 40s, was in the audience as McDonald took his oath of office. In 2002 Shine started the "Heart & Soul of Magic," a touring show features a collection of African American magicians from around the country.

"This is a part of American history we don't know about," Shine says, pointing out that the first American-born magician was actually a black man named Richard Potter. "This is rich history, not just about magic, but the history of these magicians are related to the history of this county."

As for McDonald, he says he simply wants to be the best president he can be, for the current members of SAM and for the worldwide community of magicians as well. He says there's more work to be done, especially when it comes to attracting women to the craft.

"I don't want to be the black president," he says. "I value the history of it, but I want to be defined as a good president. A president who just happens to be African American."