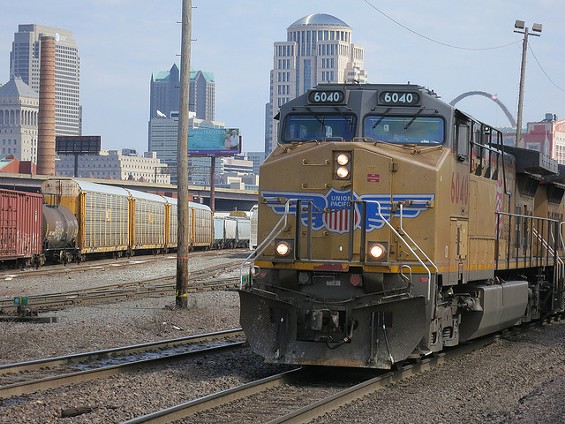 Trains filled with the same explosive oil that leveled a Canadian town will no longer run through the city of St. Louis, much to the relief of St. Louis' fire chief and a group of residents organizing against the tankers.

"We just won round one," says Timothy Christian, a member of the newly formed St. Louis for Safe Trains, a group composed of mostly Holly Hills residents who first fought back against the dangerous trains. "I brag about the south side all the time. This is what is right. This is what needed to be fixed."

Christian lives a block and a half from the rail line where trains were transporting hundreds of gallons of the volatile oil every two hours.

The trains, which started rolling through the city in fall 2013, are a sign of the boom going on in the crude-oil industry. As fracking in the shale flats increases exponentially, more and more trains loaded with the oil -- and dangerously explosive vapors -- started traveling through the city.

"This isn't about fracking," otherwise known as hydraulic fracturing, a highly contentious method of extracting natural resources, says Christian. "It's about a bomb a mile long and 50 feet from our kids and our businesses."

Trains carrying the same oil have already caused explosions, spills and fires around the country and in Canada. Last July a runaway tanker exploded, killed 47 people and demolished the center of a Canadian town.

St. Louis Fire Chief Dennis Jenkerson knows just how deadly a train explosion or spill could be for Holly Hills, where he lives, or any other St. Louis neighborhood near the train tracks. He's been pushing for months to get the equipment his firefighters would need in case of an incident, and firefighters have already had twelve days of training on the tankers.

"We are too close" to the dangerous trains, Jenkerson tells Daily RFT. "We have to back up a little bit. In a crash or an accident, this becomes a big issue."

Tankers containing small amounts of the oil will still run through the city, Union Pacific Railroad tells Jenkerson. That minimizes, but doesn't eliminate, the risk of an explosion.

"It relieved my worries considerably," Jenkerson said at a St. Louis for Safe Trains meeting Monday, according to KSDK (Channel 5). "It's still a problem, but it's nowhere near the hazard we had before with 3 million gallons of product coming through."

Holly Hills residents began their push against the trains in their neighborhood when resident Judy Studebaker, who lives very close to the tracks, first sounded the alarm.

"It took a while for Judy [Studabaker] to get everyone's attention," Christian says, "but when the fire chief shows up and says, 'OK, this is a real problem, and we don't have enough to fight it,' this went from, 'We might have ourselves a problem here,' to 'OK, we are going to get this done."

The group has held meetings, talked to experts, pamphleted the neighborhood and organized to protect the city from a potential disaster.

"It was just intolerable, and we had a tremendous response because of it," Christian says. "We're just one neighborhood. We're not going to wait for other neighborhoods to join this fight, but hopefully they'll see it and join."