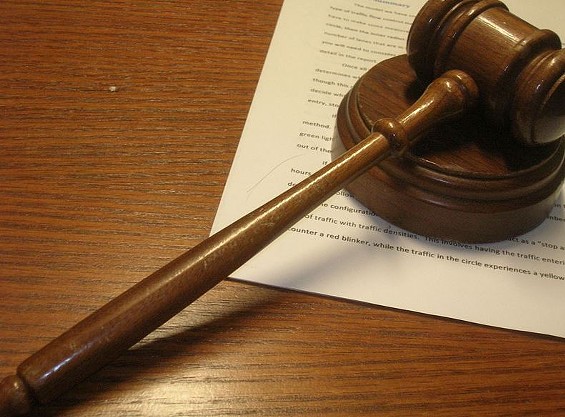 The Missouri Constitution says that courts must be open to the public. But in several St. Louis County municipal courthouses, that's not always the case. Now, after attorneys who work in the county expressed their concerns, a top county judge has ordered the courts to open up.

"There are still a substantial number of municipal courts that limit seating only to defendants and defendants' attorneys, without any justification," Presiding Judge Maura McShane -- who has administrative authority over municipal courts -- writes in a June 24 letter. "The practice is not only a clear violation of the Missouri Constitution, but it also subjects those to potential claims for violations of Constitutional rights."

The order comes after lawyers from ArchCity Defenders, a nonprofit law firm focused on indigent clients, as well as professors from the Clinical Law Offices of the Saint Louis University School of Law, brought the matter to the attention of McShane and other County judges beginning back in March.

As a result of those meetings, they formed a group called the Open Courts Committee and started an investigation into the openness of municipal courts.

According to Thomas Harvey, executive director of ArchCity Defenders, members of his organization had observed "unconstitutional closings" in the courts of Bel-Ridge, Hazelwood, Maplewood, Bellefontaine Neighbors, Creve Coeur, Dellwood and St. Ann, among others.

"Many of these courts had signs up outside the courtroom or posted the unconstitutional closing on their website," Harvey tells Daily RFT. "Those signs have been removed as well as the notification on the website. Our attorneys have not observed any courts closed to the general public since the letter from Judge McShane."

That investigation noted that many courts are extremely small -- such as Charlack, where the courtroom is not much bigger than a double-wide trailer. These smaller courtrooms have legitimate restraints such as fire codes, which limit how many people they can have in the courtroom. However, the Open Courts Committee found that there is still room for improvement, and McShane warned that failure to comply could result in legal retaliation.

"This is a voluntary Order, but if the judge in your city chooses not to sign the Order, as finally adapted for your court's particular situation, and there remains limitation, I reserve the right to take further action in my capacity as Presiding Judge in St. Louis County." McShane writes.

"In addition, I alert you that there may be future litigation filed by an interested group, either by class action or individual courts."

Under the new rule proposals, people will only be denied entry if they are disruptive, on alcohol or drugs, are not wearing proper attire, or if they're a child unaccompanied by a parent or guardian.

Allowing children into the courtroom is a vital new step, says Harvey. If a mother comes to court with her kids and they're not allowed in, that poses a serious problem.

"Her choice is to leave the kids outside alone or not go into court and potentially get a warrant issued for her arrest," Harvey explains. "It's unconstitutional, and it hurts the poor and minorities the most."

Other suggestions include additional court nights and longer court hours for days when a "larger than normal crowd is expected," as this would help prevent overcrowding.

In a joint statement from ArchCity Defenders and professors from the Clinical Law Offices at SLU School of Law, the two legal groups say they plan on keeping tabs on the effort to open up the county's courts.

"We intend to monitor compliance with Judge McShane's letter and proposed order and report back to her with respect to both successes and any problems we observe in the implementation of the Judge's communications to the municipal divisions," the groups say.

"This opening of the Municipal Courts to the press and the public represents an essential first step towards more significant reform."