Claire "Money" McCaskill to Hillary Clinton: "Being Rich is Just Being American!" 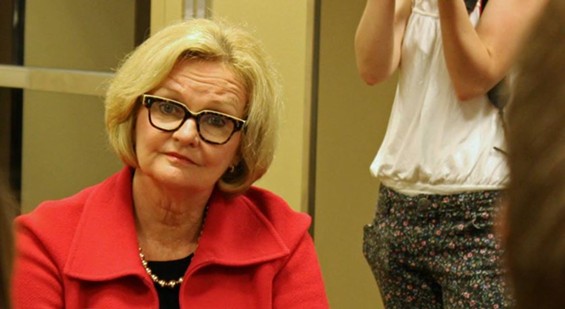 McCaskill went on Morning Joe to give her thoughts on pressing issues like Dr. Oz (bad), the Cardinals (good), and Iraq (she's not sure what to do over there). But then McCaskill was asked about the gaffes Clinton has been criticize for when talking about her wealth, like saying she and Bill were "dead broke" after leaving the White House.

So what advice did the 17th wealthiest politician in Washington with a personal net worth of $21 million, a taxpayer funded salary of $174,000 per year, and a husband whose business affiliations have received $40 million in federal subsidies give to the likely presidential hopeful?

Lyndon B. Johnson was also born into money, but his father lost much of it early on. LBJ wouldn't get back into the 1 percent until the 1940's when he he used his political influence as a congressman to help his wife, Ladybird - a daughter of a wealthy businessman - buy up Texas media properties and make millions.

And Bill Clinton, who wasn't rolling in dough before becoming president, cashed in afterward through book sales and speaking fees, just like Hillary. For the more than $50 million he's taken in talking about himself, Clinton is considered to be in the top 10 of wealthiest presidents.

Of the top 10, it seems only Herbert Hoover actually made his own money through means other than slavery, inheritance, or political advantage. But he made his money through mining companies during a time when 11,000 workers died every year in the mines, so that money is not without at least a little blood on it.

Nonetheless, McCaskill believes that all Clinton needs to do is be more comfortable talking about her wealth and the huddled masses will Vote Hillary 2016 - maybe because poor people will think they'll be rich under a future President Clinton's economic policies.

"Her policies are about enabling families to have opportunities in America where they can, in fact, make a lot of money and live their dreams," McCaskill said on the show, presumably before going back to her $2.7 million Washington D.C. condo to think about the 15 percent of Missourians living in poverty.

Advice to Hillary starts at around the 7:00 minute mark...