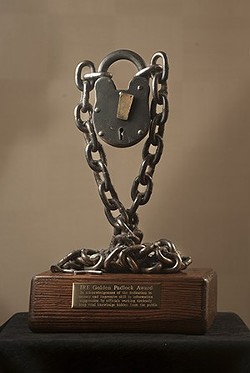 Update, June 30: Nixon won the Golden Padlock Award over the weekend! Hooray for secrecy! See below for more details. End of update.

Missouri Governor Jay Nixon is great at keeping secrets. Maybe too good. Last year, after the state was forced to find a new source for its execution drug pentobarbital, he declared the identity of the execution drug supplier a state secret, alarming journalists and citizens alike who say this is a violation of the state's Sunshine Law.

Which brings us to the Golden Padlock Award, a thoroughly tongue-in-cheek honor presented by the Investigative Reporters and Editors, a professional organization of journalists headquartered at Mizzou's School of Journalism.

Yesterday, IRE announced its finalists for the "award," which celebrates the most secretive government agency or individual in the United States. Nixon made the short list, co-nominated alongside Oklahoma governor Mary Fallin.

"We look for particularly creative and novel methods of secrecy," says Toronto Star reporter and IRE board member Robert Cribb. "We're finding that there's tremendous secrecy at the state and local level that does not typically get the same level of public awareness. This is an opportunity to highlight that."

Nixon and Fallin have used similar tactics to hide the methods used by their respective prison systems to obtain execution drugs. Last week, inmate John Winfield became the seventh Missouri prisoner die since November; Oklahoma hasn't executed anyone since it badly botched the execution of Clayton Lockett in April.

Cribb came up with the idea for the award two years ago. In 2013, an IRE committee chose to give the inaugural Golden Padlock to the U.S. Border Patrol for its "unrelenting commitment to undermining the public's right to know."

"Certainly there's a very strong anecdotal sense that the secrecy is getting worse," Cribb says. "Governments are getting increasingly sophisticated on these things, and there are fewer reporters and more public relations types. Their army is bigger than our army."

The winner of the 2014 Golden Padlock will be announced this Saturday at the IRE's national conference in San Francisco. Just like last year, Cribb tells Daily RFT an invitation has been sent to the winning agency/official to attend the ceremony.

No one from the U.S. Border patrol showed up to claim the handsome trophy last year, and we're guessing that Nixon -- if he wins -- will also be a no-show.

"Openness and transparency are important to understand how processes work and how decisions are made. It's not always a question of good or bad," says IRE executive director Mark Horvit. "The argument is that the citizens of the state have a right to understand what's being done in their name."

Update continued: On Saturday, a panel of journalists "honored" Nixon and Oklahoma Governor Mary Fallin for their efforts to ensure state execution policies remain hidden from citizens and journalists. Nixon also shared the award with the U.S. Navy Freedom of Information Act office, which blocked a reporter's request for records about the September 2013 massacre at the Navy Yard in Washington, D.C..

"Being named the most secretive government agencies amid competition this fierce requires an unwavering commitment to undermining the public's right to know," IRE board member and Golden Padlock committee chair Robert Cribb says in a press release. "The creativity and innovation behind their cloak and dagger efforts have distinguished them for this unique honor."