Growing up in the architecturally rich and historic city of New Orleans, artist Carlie Trosclair wasn't easily impressed by clean, tidy and new construction. To Trosclair, true architectural beauty lies in the ornate and weathered buildings that rose up in the Crescent City during the 1800s and early twentieth century. It's the same way in St. Louis, where Trosclair has lived since 2008 when she arrived to attend grad school at Washington University.

Last year Trosclair created an installation at 3531 California, a house in south city, that focused on the various layers of wallpaper, paint and dirt that accumulates on and in a century-old house. Now in a new installation at the Contemporary Art Museum (as part of the prestigious Great Rivers Biennial), Trosclair continues to respond to St. Louis' fading architectural glory. 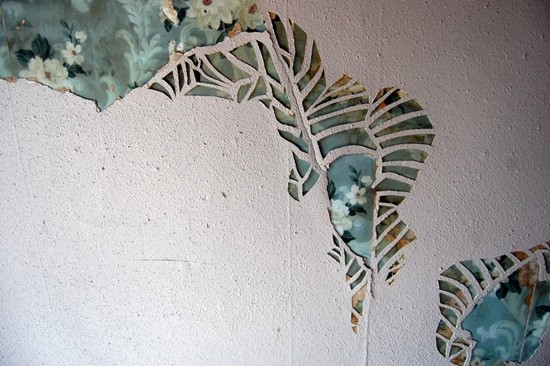 See Also: A critique of Trosclair's work as part of the Great Rivers Biennial

"When I moved to St. Louis I found the same rich textures within the layers of peeling paint, rusty metal and deteriorating wooden structures," she says. "Naturally I fell in love with the red-brick castles in my neighborhood in Tower Grove East; their intricate brick design and bold colored trims as well as the deteriorating homes."

One house in particular -- at 2900 St. Louis Avenue -- inspired her interest in St. Louis' decay and abandonment; almost fittingly, the house was torn down last winter. Trosclair believes Americans have become too obsessed with modernity, with age and grit becoming symbols of poverty, just as sterile and uniform architecture has become a symbol of wealth and success. 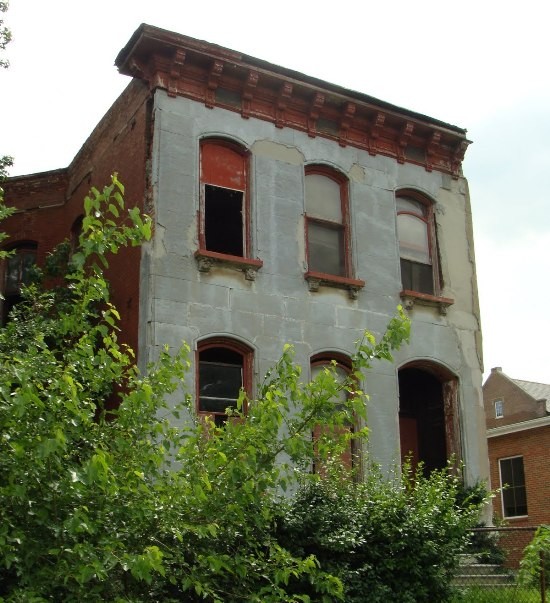 "Our society has a panicked way of covering up age, not showing scars, upholding a very particular and refined image of beauty. Modern and shiny architecture in other cities feels cold and unwelcoming to me. There is something more honest and vulnerable about an old city." 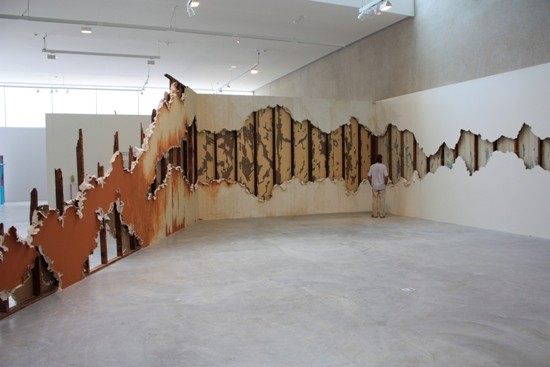 In the seemingly pristine and relatively newly built Contemporary Art Museum, Trosclair came to an important realization while installing her exhibition last month:

"A big challenge I faced was how to address the lifespan of abandoned buildings within the context of the pristine museum walls. Museums purposefully erase indications of past exhibitions, resetting to neutral to create an environment that is timeless in appearance."

Perhaps what is most striking about Trosclair's installation is that it utilizes the entire height of CAM's exhibition space.

The materials used in the installation came from actual St. Louis buildings that either have been demolished or rehabbed recently. In particular, some of the two-by-four timbers came from a house in Old North St. Louis, itself an embodiment of Trosclair's interest in the slow, inexorable deterioration of just another of the city's anonymous buildings. It also brings to mind Marcel Duchamp's Readymades, common items (such as the infamous R. Mutt Urinal) elevated by the French artist to the level of high art. In the same way, the common, everyday building materials of St. Louis take on a new level of importance in the white spaces of the gallery. 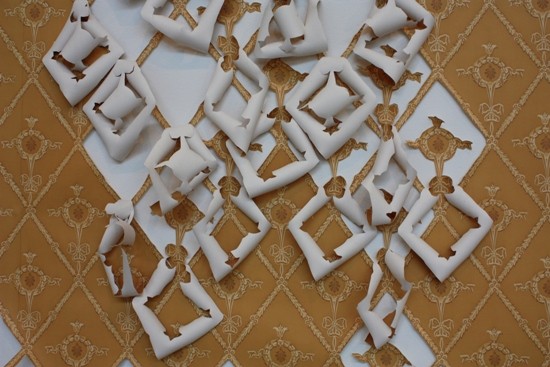 Trosclair's next project has her teaming up with well-known local preservationist Michael Allen for a collaboration titled 30 Days of Demolition, which will collect and analyze the remnants from St. Louis building demolitions over one month's time.

Concludes Trosclair, "You can't be in St. Louis city and not be interested in the architecture on some level."