The "Snowden effect" has hit the Show-Me State, and two state lawmakers hope the feds will take notice.

Sen. Rob Schaaf and Rep. Paul Curtman, both Republicans, have added a ballot to the August 5 primary that will allow Missourians to vote on whether the government shall be allowed to access their electronic communications without a search warrant.

The question on the ballot reflects a desire to modernize the language of the Fourth Amendment, which protects against certain searches and seizures in one's home, but not necessarily against one's digital footprint. Here's what voters will be asked:

"Shall the Missouri Constitution be amended so that the people shall be secure in their electronic communications and data from unreasonable searches and seizures as they are now likewise secure in their persons, homes, papers and effects?"

Schaaf tells Daily RFT that the ballot question is something people believe should be a common right.

"You're protected under the Missouri constitution and the Fourth Amendment of the U.S. constitution that you will be secure in your persons, papers, homes and effects," he says. "And this would just add on 'electronic communications' to that, which is what people expect. People want to be secure in knowing that if they text each other that the government isn't going to be snooping and reading all of their texts and emails."

If the constitutional amendment passes, SJR 27 will make Missouri the first state in the country that will have made a constitutional response to the federal government's massive surveillance reach, the extent of which was revealed by former National Security Agency contractor Edward Snowden.

Schaaf and Curtman aren't shy in admitting that the amendment was inspired by Snowden's intelligence leaks, calling their measure "a direct response to revelations about the scope and nature of the NSA's domestic spying programs."

However, that doesn't mean that Missourians will be protected from the NSA just yet. Schaaf tells Daily RFT that the amendment could only apply to government entities within the state, such as police departments.

Click on the next page to learn more about the proposed amendment... 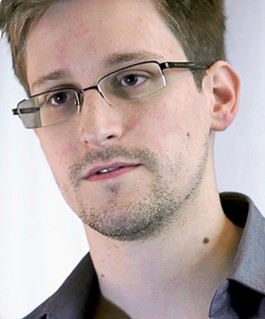 "[The amendment] would only apply in Missouri because federal law and constitution preempts Missouri law," Schaaf explains. "Right now, there isn't anything stopping police from accessing your electronic items when you're arrested, and this would make it required that they would have to have a warrant based on probable cause that a law has been violated."

See also: St. Louis' "No Refusal Zone" Means Cops Can Get Warrants For Your Blood Faster and Easier

The main goal for Schaaf and Curtman is to send a message to Washington, D.C.

"The real reason why we did this is to get it in federal law," he says. "This is an opportunity for a test vote on the issue where the people of Missouri will be given an opportunity to say how they feel. And, you know, Missouri is usually kind of a proxy for the mood of the country. We think that Missouri can be the bellwether for this issue, and I predict a high voter percentage for this amendment. I mean, who's gonna vote against it?"

This isn't the first time efforts to curb government surveillance powers have been introduced by Missouri lawmakers. Several bills have been proposed to limit government powers on such surveillance techniques as limiting drone use and, like what Schaaf and Curtman hope to implement into the constitution, require a warrant to obtain information on electronic devices.

All of these bills are still in various levels of committee.

It's difficult to measure how much Snowden has inspired these privacy measures in Missouri, but there's no doubt he has had some effect, especially for Schaaf and Curtman who openly admit Snowden's influence on their actions. And although many people in high-level government circles consider him a traitor, Schaaf is more philosophical about the feds' most wanted man.