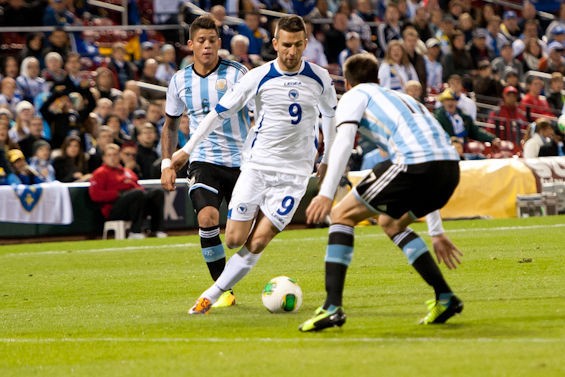 Ibisevic's last-minute goal wasn't enough to bring Bosnia to victory over two-time world champion Argentina, who won 2-1, but the moment was still historic for Bosnian sports fans, especially in St. Louis, which hosts the largest Bosnian community outside of Bosnia.

ESPN commentators were quick to bring up Ibisevic's roots in St. Louis' Bevo Mill neighborhood, although they should probably have done more research first:

Here's the video of Ibisevic's goal, which he snuck right through the goalkeeper's legs:

This is the first year Bosnia has ever been to the World Cup, the world's preeminent soccer contest. Like many of his teammates, Ibisevic moved away from his home in Bosnia as war disintegrated the former Yugoslavia from 1992 to 1995.

Ibisevic has never fully opened up about what he went through before fleeing for Switzerland and, eventually, St. Louis, but the Associated Press reports he survived being killed by Serbian soldiers as a child by hiding in a fox-hole in the woods with his mother and sister while soldiers murdered his grandfather and burned down his father's village.

Ibisevic made it to St. Louis at 16, playing soccer for Roosevelt and SLU. He returned here twice in the last year for international friendly games at Busch Stadium and the Edward Jones Dome.

Ibisevic's goal-scoring abilities are keeping him in the Bosnia history books. He scored the only goal in the qualifying game against Lithuania that got Bosnia into its first World Cup.