Someone with horrible taste wants the city to stop arresting the homeless for begging.

That appears to be the rationale behind whoever pasted official-looking stickers to signs originally meant to discourage panhandling at busy intersections. Before road crews removed them on Tuesday, a half dozen signs along I-55 suggested motorists join the city's "Final Solution" by sticking homeless people on trains to Auschwitz.

KSDK reports that police are hoping to use nearby red-light cameras to catch the perp behind the Nazi-invoking stickers. A Reddit user posted a photo of another defaced sign, this one apparently on Grand Boulevard.

Though the city's signs are clearly targeting homeless individuals, Joe Yancey, director of Places for People, a St. Louis-based homeless outreach and services organization, says it's likely the city was getting complaints from motorists about panhandlers approaching their cars.

"I don't see much wrong with the sign the city put up," Yancey tells Daily RFT. "They're using the signs as a tool to address a specific issue, and I think that's a response to complaints they've been getting.

"Is it the best response? That can be questioned." 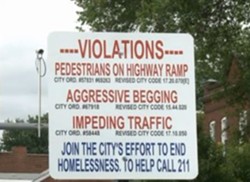 In any case, ordinances against aggressive begging and impeding traffic would still exist without the signs.

Yancey says St. Louis officials are "at the table" with homeless service providers like Places for People, which is a lot more than can be said for other cities. While he can understand why laws against begging might anger activists trying to help the city's homeless, defacing the signs won't help anyone.

Indeed, there are plenty of options available to actually help St. Louis' homeless, including Places for People. There are many more emergency shelters, soup kitchens and outreach groups that could use your help.

For more ways to help the homeless -- as well as other opportunities to make St. Louis a better place -- check our RFT's Summer Guide.