Steve Westcott is Walking Across St. Louis, and America, With a Goat 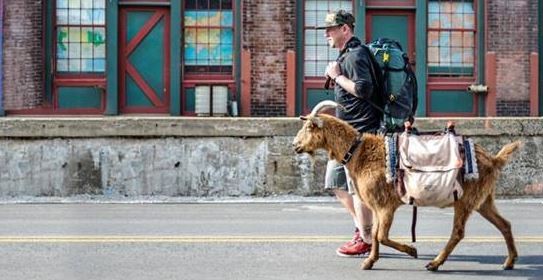 Steve Westcott gets asked about his goat a lot.

After two years walking across the country with trusty LeeRoy Brown the goat by his side, Westcott has come up with a few comparisons to offer the curious: A goat is like a toddler in a shopping mall, because it walks so slowly. It's like a good girlfriend, because it keeps him company but doesn't complain.

But most of all, it's like a pack mule, because it carries Westcott's gear as he travels by foot from the Space Needle in Seattle to Times Square in New York.

"The Internet said goats are a pack animal, but what they don't tell you is that they are really slow," Westcott tells Daily RFT. And the more gear LeeRoy Brown carries, the slower it goes -- especially when everyone they walk past wants to chat about his goat. "I'm packing for him now. That's what's happening."

Westcott and his horned sidekick are two years into a cross-country walk designed to raise awareness and funds for the orphanage he wants to build in the slums of Nairobi, a goal a friend suggested after a year on missionary work in Kenya, where orphans as young as five years old are already using drugs "just to kill the pain and the hunger pains and to stay warm at night," Westcott says.

The organization, called Uzima Outreach and Intervention, helps drug addicts in Kenya, and Westcott wants to raise $200,000 to build a children's home for the group on his cross-country hike. So far, after two years of walking, he's raised less than $30,000.

But raising $170,000 more doesn't seem to worry Westcott. After just a few minutes chatting with him, it's clear there's a larger force at work in Westcott's mission.

"We do the work, but God does the miracle," says Westcott, an evangelical Christian. "There's no way a guy with a goat can raise $200,000 to buy land in Africa. It's not cool enough, it's not hip enough, it's not special enough. There has to be a miracle."

Westcott finds small miracles on his journey. Monday, a stranger gave him $10 to buy lunch at Five Guys Burgers and Fries in St. Louis. Other strangers offer to house him for a night and drive him back to his walking path. Staff at the bar Fallon's Bar and Grill in Olivette ran into Westcott at a copy center and offered to host a fundraiser for him.

"Stuff like that is what keeps me going because I ran out of money a long time ago," Westcott says.

Even when (if?) Westcott reaches his goal, he says he's not ready to stop living his transient lifestyle.

Fallon's Bar and Grill in Olivette will donate 15 percent of sales to Westcott's cause on Friday, June 13. Westcott says he'll be at the restaurant starting at 4:30 p.m.