St. Louis' "Most Reverend" cloaked man says that back in the wild and crazy '80s, he didn't know sexually abusing a child was against the law.

The comments came during a deposition for a lawsuit against Thomas Adamson, a former priest who is accused of molesting more than a dozen kids in the Minnesota area during the 1980s. Carlson was the chancellor of the Minnesota archdiocese during those years, and attorneys representing the plaintiffs called upon him to comment about what he knew.

And Carlson basically said he knew so little, that he didn't even know raping kids was a crime.

The deposition was made in May but not released until Monday by attorney Jeff Anderson, who represents the plaintiff in Minnesota. Anderson also released video of the deposition in which Carlson repeatedly denies knowing whether or not sexually abusing a child was a crime back in the 1970s and '80s. Here's the video:

Anderson: "Archbishop, you knew it was a crime for an adult to engage in sex with a kid."

Carlson: "I'm not sure I knew whether it was a crime or not. I understand today it's a crime."

Anderson: "When did you first discern it was a crime for an adult to engage in sex with a kid?"

Anderson: "When did you first discern that it was a crime for a priest to engage in sex with a kid who he had under his control?"

Carlson: "I don't remember that either."

Anderson: "Do you have any doubt in your mind that you knew that in the '70s?"

Carlson: "I don't remember if I did or didn't."

Anderson: "In 1984, you are a bishop, an auxiliary bishop in the archdiocese of St. Paul and Minneapolis. You knew it was a crime then, right?" Carlson: "I'm not sure if I did or didn't."

Click on the next page to see memos Carlson wrote in the 1980s that might prove he did know...

Carlson's memory is pretty bad, according to Anderson. The Minnesota attorney has deposed Carlson fifteen times over the years, but memories are continually out of reach.

"He said 193 times...'I do not remember,'" Anderson says, according to CBS Minnesota.

But Anderson released several documents that cast doubt on Carlson's claims that he wasn't sure about the legality of sexual abuse, including a 1984 memo written by Carlson to then-archbishop John Roach, in which the future St. Louis archbishop expresses concern over allegations: 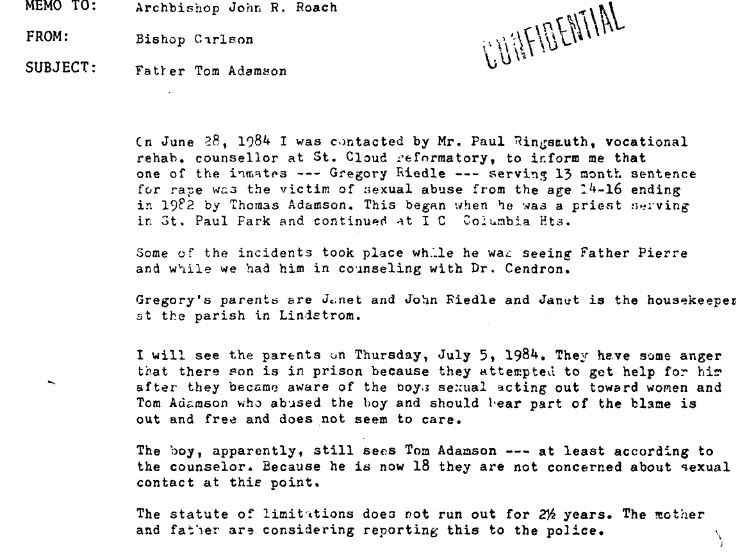 Several more documents released by Anderson appear to illustrate that Carlson was very aware of the illegal nature of sexual abuse, that he avoided getting police involved, and even tried to save the perpetrator's priesthood status. After finding out Adamson was being accused, here's the recommendation Carlson offered in 1984 (whole letter can be seen here):

More videos of Carlson's bad memory can be seen on Anderson's website.