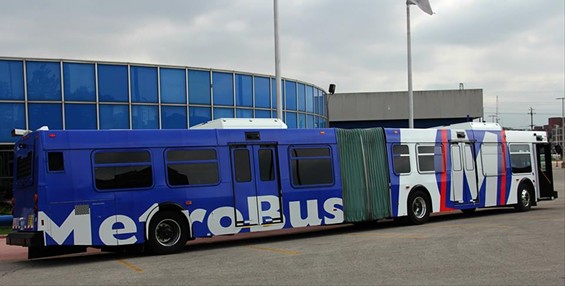 Whether you drive along Grand Boulevard or catch the No. 70 Grand Line bus, you'll notice something new on your commute this morning.

"Not only will it be more comfortable for them to ride it, it will offer extra capacity so we can actually attract more people to the system," says Metro CEO John Nations, to St. Louis Public Radio. "So a lot of people who now do not have the ability to get on it will have the ability to get on it. It's another opportunity for them to ride public transit."

Wow! The new 60-foot MetroBus now on the #70 Grand line. (You should see the one that got away!) #fgs pic.twitter.com/A39DM2mHCP

The new buses mark the first time in twenty years that Metro has added a new public transit vehicle to the city's fleet. At least five are scheduled to run today, and Metro will eventually roll out fifteen buses to operate the entire line.

Each bus costs about $430,000, bringing the grand total for fifteen buses up to $6.4 million. Metro says it cut the cost for the new fleet in half buy restoring old buses with all-new insides, from the wiring to the engines, rather than buying new buses.

Post by St. Louis Metro Transit.
The ten-mile-long No. 70 Grand Line has been one of the region's busiest for decades, serving more than 9,000 boardings on an average weekday.