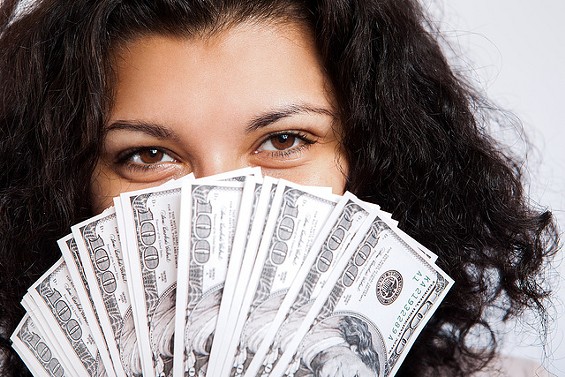 If your idea of a good time is watching people dig through trash over the possibility of finding $30, then it's been a great week for you.

"We always watch the news, and unfortunately there's always bad stuff and not enough good stuff," the person/s behind Hidden Cash St. Louis told KMOV's Steve Harris. "So we thought, 'Why don't we take this opportunity to give out some cash and lift people's spirits and stuff?'"

But for anyone paying attention to the frenzied searches for cash, the whole enterprise seems more unsettling than any 5 p.m. news broadcast. Here's what we find so troubling:

Almost immediately, the dangerously Black Friday-esque nature of the feverish search for money raised fears about the safety of hidden-cash searchers and the people around them. Even the Hidden Cash St. Louis people are worried:

Location will be given out soon. We just want to make sure we all be SAFE

Be safe ppl plz so we can keep this going. Next clue in little bit

BE SAFE DO NOT RUSH PLEASE

The original hidden-cash dropper, an anonymous millionaire working in real estate in California, had to rethink his drop locations when a search for $200 brought a crowd of at least 500 to a crowded shopping center, resulting in what police called a "traffic nightmare."

Three more reasons why Hidden Cash St. Louis is not good news for the Lou on page two. 2. People's motivations for hunting for hidden cash reveal just how hard life can be.

Which leads us to a larger question: Why would anyone give up an afternoon for the slight chance of finding an envelope stuffed with a few twenties or tens?

Some people searching for cash say they'd spend it on treats, like the doctor who said she was buying herself some ice cream. Some are paying it forward, like the lady who bought $60 worth of coffee for people in a coffee shop with her winnings.

But the more you read about how people hope to spend their newfound money, the more the whole thing sounds like a farce staged by Occupy Wall Street to highlight the struggles of the working class. As costs for health care, transportation and food continue to rise while workers in real estate and e-commerce apparently earn more money than they know what to do with, money, even a little, goes a seriously long way on a paper-thin budget:

@hiddencash314 if I find the money I would give it to my childrens school who desperately needs it to keep the school open.

@hiddencash314 drop in florissant. We have the worst housing market. My house value dropped by $40k in my zip code. $$$$$$$ Needed bad here.

@hiddencash314 I sure could benefit from finding anything. I've been unemployed for almost a year. don't have a smart phone,so out of luck

And if that weren't depressing enough, apparently people are flooding the original Hidden Cash account with hundreds of desperate requests for money.

"Let me say right now -- don't ask me for money," the anonymous benefactor, who has given away $10,000 so far, tells the Huffington Post. "I am giving more than most people in my position already, through various means."

3. We're even more worried about who isn't searching for hidden cash.

But the deep, inescapable irony of hidden cash has more to do with who isn't searching for cash than who is. The poorer or more socially vulnerable you are, the less likely you are to find an envelope of your own, it seems.

Let's start with the most obvious barrier to entry: The only people able to participate in Hidden Cash's secret drops are those with constant access to social media. Winners need a smartphone with Internet access and a fluent understanding of Twitter, Facebook and, now, Instagram to access clues, which are released in driblets so the organizers can hide the money without being seen.

So hidden-cash games immediately exclude the 20 percent of Americans -- mostly the elderly, poor and minorities -- who have almost no access to the Internet. For the other 80 percent of Americans, it's hard to even fathom life in 2014 without at least a dial-up connection on a desktop; that doesn't change the fact that 60 million Americans live without the Internet (let alone a Twitter account.)

But even if you have a smartphone, Internet access, social-media fluency, reliable transportation and several free hours, there's still one thing you have to get right in order to get the money: geography.

That is not the worst thing about it -- there are so many -- but it's interesting to note their targeted demographic https://t.co/pMLhTR5MuH

The anonymous donors behind Hidden Cash St. Louis constantly ask followers to suggest new locations for money drops, so it's no surprise they chose four affluent and tech-savvy neighborhoods rather than, say, Fairground Park, for the first drops.

There's still time for Hidden Cash St. Louis to add some racial and economic diversity to it's drop locations. (May we suggest Florissant? Forest Park Southeast? We'd be happy with almost anywhere in the city, really.) But so far, it seems that any treasure hunter living in a poor or black neighborhood is simply out of luck.

Luckily for Hidden Cash St. Louis, few really seem to care about the racial or socio-economic implications of their cash drops:

@hiddencash314 Thanks for the blessings you are given to us.... no matter what, you are truly touching people lives......

@hiddencash314 This is so fun! Don't let the snarky comments people leave get you down!

@hiddencash314 Whoever you are, you rock! There seem to be alot of complainers but most people can appreciate what u are doing. Thank u

@hiddencash314 @megady they are giving away money that people may need & getting people moving & having fun! I thinks it's great!