Another Modernist landmark will soon vanish from St. Louis once wrecking crews complete the demolition of State Bank of Wellston. But at least once piece of the historic bank at Martin Luther King Drive and Kienlan Avenue will live on. Last month preservationist Larry Giles salvaged the building's iconic sign and safely transported the massive structure to his architectural non-profit, St. Louis Building Arts Foundation. 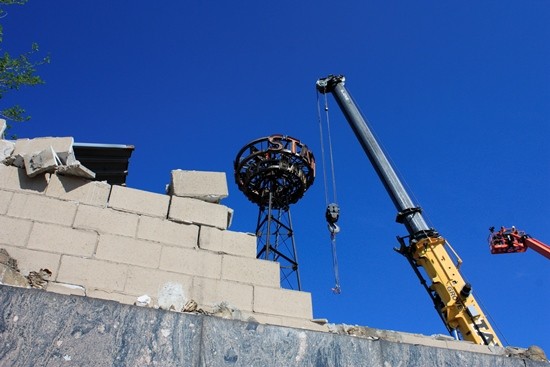 For decades the State Bank of Wellston anchored the western end of a lively commercial strip that straddled the city-county divide. But by the 1970s many of the major commercial institutions along that stretch of MLK Drive had either moved out to newer suburbs or closed, including a JC Penney that left the strip without a major anchor on its eastern edge. The State Bank of Wellston, meanwhile, was eventually bought by Regions Bank that now occupies a newer building nearby.

Read more about how the historic sign was saved. 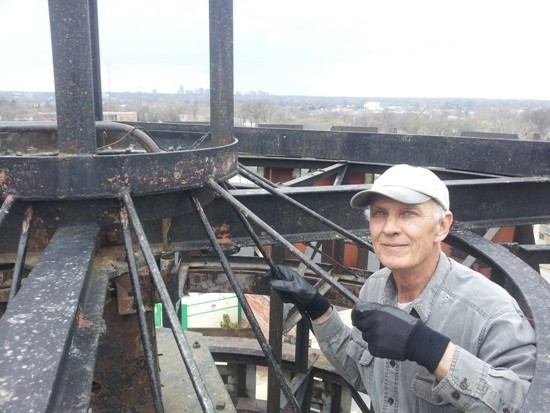 Larry Giles grew up just south of the Wellston Loop. He remembers when the commercial district was still bustling, and he never forgot the distinctive rotating sign that graced the State Bank's roof. So last year when he heard that the bank faced demolition, Giles resolved to save a childhood memory. After successfully raising the $19,000 to rent the crane and flatbed trucks needed to dismantle and remove the sign, Giles set to work. 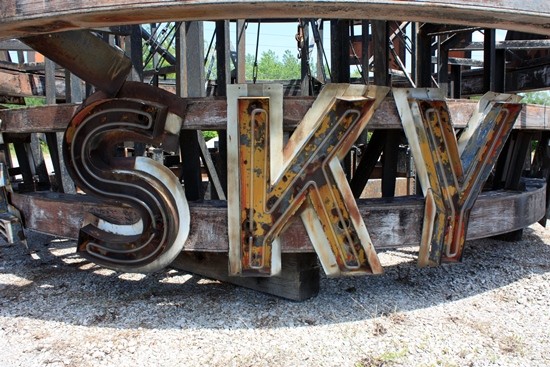 "Although a bit of a challenge, I couldn't pass up the opportunity to rescue this great survivor," says Giles. On May 16, a bright Friday morning, steel workers began removing the bolts holding the major components of the sign together. The first part of the structure to come down was the weather ball, which once broadcast a simple weather forecast to commuters by changing from red to blue or white. Next came the formidable task of dismantling the giant revolving sign, still secured in place, and placing it on a flatbed truck (appropriately labeled "Wide Load"). Perhaps most people would be content at that point, but Giles pressed on and loaded the entire tower that held the sign onto a second flatbed truck.

Once safely transported to the St. Louis Building Arts Foundation in Sauget, the beauty and craftsmanship of the sign became apparent. Giles plans on renovating the sign to its former glory and -- eventually -- putting it on display for a new generation to appreciate.