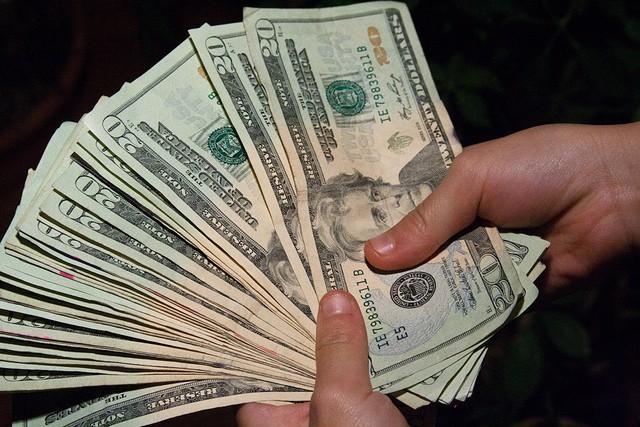 Someone in St. Louis with too much time and money on their hands is hiding wads of cash throughout the city and leaving clues for treasure-seekers on Twitter.

And the next big drop is happening today.

One lucky winner, Chris Heck, already found an envelope full of cash from the anonymous group, who call themselves Hidden Cash St. Louis, taped to the back of a bench by the boating dock at Creve Coeur Lake. It's not clear how much money was in the envelope, but Hidden Cash St. Louis' organizers have been tweeting photos of stacks between $50 and $150 or more.

St. Louis' hidden cash Willy Wonkas were inspired by the anonymous, wealthy California man using social media to tip off followers to the $1,000 per day he is hiding in public places in San Francisco, Oakland and San Jose. The anonymous donor tells CNN that he's giving away the money as "an anonymous social experiment for good."

The next Hidden Cash St. Louis drop will be sometime Monday, organizers posted online. Want to find the cash for yourself? Here are three ways to follow the clues.

2. Facebook - The more Facebook and Twitter followers Hidden Cash St. Louis has, the more cash organizers say they'll leave around town in their social media scavenger hunts. After only a day of giving out cash, the group already has 990 Facebook followers and more than 1,200 Twitter followers, as of Monday morning.

3. The website - Hidden Cash St. Louis organizers say they'll leak special drop locations to anyone who signs up for their website, hiddencashstl.com.

So far, St. Louisans are totally stoked that someone is giving away handfuls of cash:

This @hiddencash314 is really exciting even if I don't win this is still awsome! #PayItForward #LOVESUMMERINSTLOUIS #mademymorning

@hiddencash314 what a great way to pay it forward. waiting for the clue... How much fun...

Are you on the hunt for hidden cash? We want to hear from you if you find any. E-mail Lindsay.Toler@riverfronttimes.com.