Circus Flora's "The Pawn" Makes All the Right Moves

If Circus Flora cofounder Ivor David Balding were here to see the 28th anniversary edition of his beloved event, he'd be well within his rights to shout, "Checkmate!"

With The Pawn, Circus Flora's story revolving around a theatrical chess match between two teams of anthropomorphic pieces, this year's one-ring circus continues the long-running production's tradition of dramatic tension and gasp-inducing stunts. Balding, who profoundly affected the international circus and theater scenes and who passed away May 9 in Weldon Spring, wrote the foreword in the event's program booklet, focusing on the similarities and connections between the circus and chess.

Indeed, we were struck by how easily circus antics fit into a larger story about the intellect behind a game of chess. Below, find six of our favorite Circus Flora lessons we'll keep in mind the next time we sit down to play the Game of Kings.

1. Pregame is as essential as the chess match itself.

If you're going to battle a formidable opponent, you've got to get into the right frame of mind, and the activities outside Circus Flora's big top certainly prepare you for what awaits. A magician mesmerizes the arriving audience with tricks while an ornate calliope wagon pumps out familiar circus notes. Animal lovers can ride or have photos taken atop decked-out camels, and game masters can play chess on a life-sized board.

2. The queens are the most important pieces on the board.

At the beginning of the show Yo-Yo the Narrator claims, "The king is beautiful and can do almost nothing. The queen has the power," and the gold-clad clown turns out to be right. Denied a king at first, the Green Queen chooses a suitor from the audience, wiggles out of her formal dress to reveal comfortable dance shorts, and dazzles the inevitable king by balancing on his hands and juggling up to five cylinders with her feet. The Red Queen is no less talented, wearing a large crown as she defies gravity while performing stunts on the high wire with her world-renowned family, the Flying Wallendas. Plus, like the narrator says, the queens may move anywhere they like on the chessboard.

A good soundtrack makes everything better, including chess. Resident composer Miriam Cutler and musical director Janine Del'Arte have developed orchestration that eschews the game's typical silence and instead brings every move to life. The Circus Flora Band watches the action from a tower high above the chessboard, accenting the heavy swing of a kettle bell or the scary lean of an off-balance, sixteen-block pillar with expert string plucks, flute trills and cymbal crashes.

4. Animals will do anything to win.

When it comes to animals and chess, many people immediately think of the horse used to represent knight, but other animals also can play pivotal roles in the game. In The Pawn, the Green Rook uses five Jack Russell Terriers to scheme his way across the board, imploring the pups to literally jump through hoops to try to attain a position of power. The Green Knight also mounts an ambitious attack, somersaulting and back-flipping over a sword as his horse gallops around the ring. But it's the Red Knight who conquers both, commanding six beautiful, rare Pied camels at once and even getting a kiss from lead camel Pasha.

5. Despite their low caste, pawns can help decide the match.

As the production's namesake, the Green Pawn is part of much of the Circus Flora action. The cheeky fellow combines the antics of Charlie Chaplain with the cunning of a grand champion as he juggles multicolored derby hats, balances nearly twenty blocks and suffers the whims of the other characters. His fortitude helps him traverse the chessboard, but not before teams of Red and Green Pawns battle it out in dramatic fashion. These daring kids and teenagers, members of the youth circus troupe from St. Louis' Circus Harmony performance school, form human pyramids, flip through the air and easily swing each other around the ring to gain control of the board. 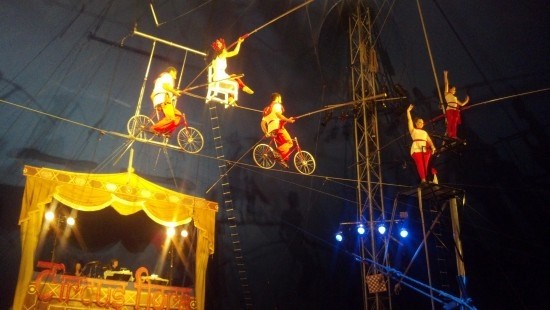 6. A good endgame trumps a checkmate.

No matter which team wins or loses, it's the final sequence that truly determines a game's worth. The chess match under Circus Flora's tent goes out on a high note with trapeze troupe the Flying Cortes taking to the air with dramatic "Wonder Woman"-style music accompanying every move. The acrobatic family easily flips from one trapeze to the other, sometimes swinging high enough to touch the roof or sides of the big top before dropping into the net below and gracefully springing back up -- toes pointed, always -- as if they were on a trampoline. From start to finish, the endgame is remarkably thrilling and has plenty of awe-inspiring moves to stack for a glorious checkmate.

Circus Flora's The Pawn runs through June 22 in the lot behind Powell Hall in Grand Center. For more information, visit circusflora.org.