Get Ready for Missouri Summers Filled with Black Bears 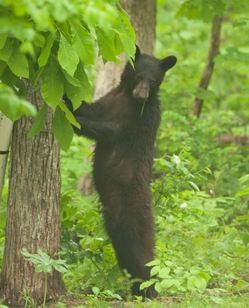 We need to talk about bears, Missouri. While the state's black bears largely disappeared in the 1950s, since then they've mounted a steady comeback by, well, mounting each other in the woods and making more black bears. Such is nature.

The Missouri Department of Conservation estimates the present black bear population at 300, with most of the bears concentrated in the southern part of state. With black bears reproducing steadily for the first time in more than half a century, determining the rate of that population growth is the next big goal for the MDC's Black Bear Project.

Beringer and his Black Bear Project team have been following the black bear population for the past four years, but to determine the rate of growth they first need to track a statistically significant number of reproducing bears.

To that end, Beringer and his team will crisscross the state over the next seven years in order to find, trap and radio-tag bears. He says June is the main time of the year for bear mating, and he's planning to tag and track female bears all the way to their winter dens to see how many cubs they've had.

But with the animals' increased population comes the inevitable collision with humans. As Beringer puts it: "You have civilization to deal with."

"There's going to be a point where you reach social carrying capacity for the number of bears on the landscape and they start to cause a lot of conflict with the people," he says. "When that happens people start to get a negative attitude about bears."

To avoid those conflicts, both the MDC and the Missouri Black Bear Foundation, a non profit, are working to educate Missourians on safe interaction with bears and efforts to conserve the animals' habitats.

"I think there is a lot of potential fear," says Jim Karpowicz, outreach coordinator for the Missouri Black Bear Foundation. "The people of Missouri need to get their head wrapped around that and take some steps as far as how they handle their garbage and how they handle food in campgrounds."

"Bears will get up on people's porches for dog food and they've been known to go after bird feeders," he says. "People should just being aware that there are these huge vacuum cleaners with incredible noses that are out there, and you can't make life easy for them."

Beringer is even more blunt when it comes to people feeding bears.

However, as the bear population grows these clashes with humans may be unavoidable. States including Wisconsin, Minnesota, Colorado, California and Florida are already dealing with bears rambling near -- or into -- human areas.

Eventually, Beringer predicts that Missouri will manage its bear problems the same way it manages its other animal problems.

"We'll hunt bears at some point," he says. "There's no question."

Until then, if you see a bear DO NOT SHOOT IT. Instead, fill out this form to help Beringer in his quest to track and preserve Missouri's fledgling bear population.