"Will you hear me or will you see me?" Corey Black says, shouting above the Delmar Boulevard traffic at the dozen or so onlookers who encircle the Walk of Fame star bearing Maya Angelou's name.

Black, a 31-year-old spoken-word poet, organized an impromptu memorial for Angelou, the celebrated St. Louis-born author and poet who died Wednesday morning at the age of 86. With a handful of other St. Louis poets at his side, Black roars the first stanza of one of his longer pieces:

"It's a testimony that somebody needs me, Some people don't get called but once in their life But I swear I hear the voice of Maya when I get called to the mic, And it tells me to get on my feet And walk to the light." 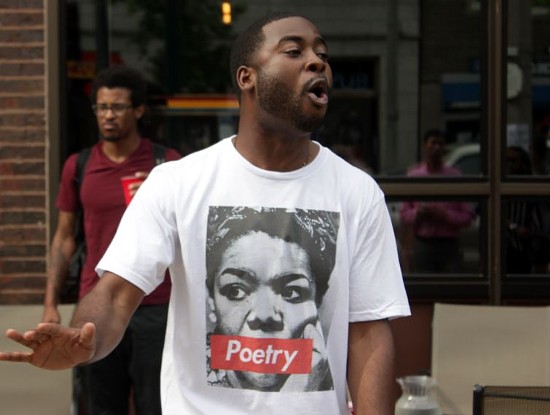 Black's first exposure to Angelou came in middle school when he watched Poetic Justice, the 1993 film whose director tapped Angelou to write the heart-stopping poems recited by the movie's main character, played by Janet Jackson.

Since then, Black says he came to see her as a beacon of African American identity and pride. At the memorial Wednesday afternoon, Angelou's star was covered in flowers, while sheets of paper taped to lamp posts and the sidewalk displayed lines from some of her poems.

Another poet, Jason Vasser, tells Daily RFT that Angelou inspired him as both person and as a writer.

"We've lost a large piece of our cultural, linguistic and literary tradition," says Vasser, who plans to graduate this December with a master's in fine arts from the University of Missouri-St. Louis. He says it was Angelou's autobiographical novel I Know Why the Caged Bird Sings that set him on a path of poetry and expression.

"In our community, many of us feel caged," Vasser says. "When she wrote that novel, for me the message is that she understands, because she's been caged as well. I think Maya Angelou was really about using poetry as way to express yourself, to allow yourself to be free, even though your mind and your body may not be." 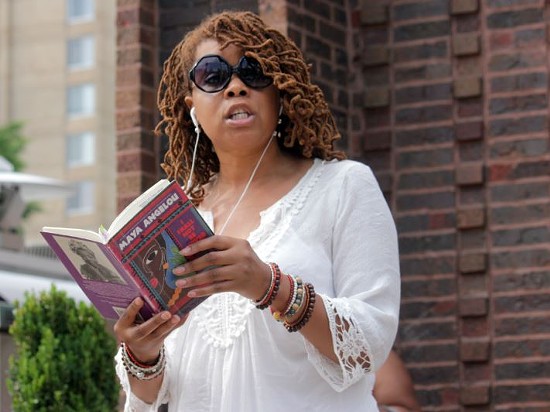