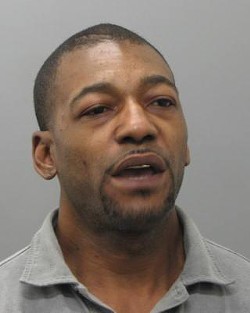 A Jennings man is in custody on suspicion of shooting two men who were trying to break up a fistfight between him and his girlfriend on Easter night.

William White, 42, of the 5300 block of Helen Avenue, faces two counts of first-degree assault and two counts of armed criminal action for the shooting. He is being held on $300,000 cash-only bond.

Police say White shot two men, including the nephew of his girlfriend, around 9:40 p.m. on April 20 because they tried to break up a fistfight between White and his girlfriend, according to the St. Louis Post-Dispatch. Both men survived; one was shot in his hand and leg, and the other was hit in his abdomen.

The St. Louis County Police Department says its Jennings detail made numerous attempts to arrest White, but officers couldn't find him. On May 22 the commander of the Jennings detail asked a St. Louis County detective assigned to the U.S. Marshals Fugitive Task Force for help, and White was arrested without incident at a home in the 300 block of Bluff Drive in St. Louis city five days later.

White has previously been convicted of assault, armed criminal action, driving while intoxicated and drug trafficking, according to court records.