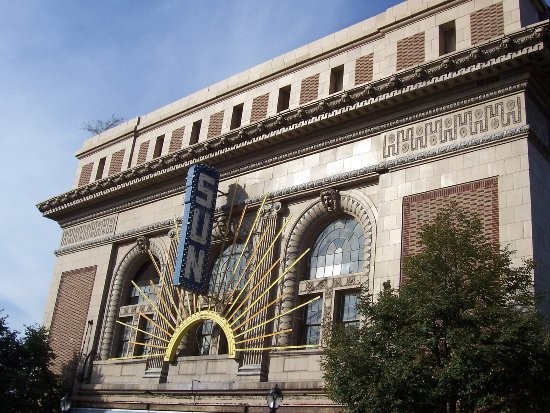 As director of Landmarks Association of St. Louis, Andrew Weil is often one of the first to learn about the threats facing the city's architectural legacy. Whether it's a historic building demolished due to neglect or development, each loss hurts. Still, Weil and his small staff keep on trudging along, knowing that another red-brick treasure might disappear without their vigilant eyes keeping lookout.

And, thankfully, it's not all gloom and doom over at Landmarks.

Lately, Weil and his staff have had plenty to celebrate, with the successful renovations of dozens of significant local treasures. For almost two decades now, Landmarks has presented its annual "Most Enhanced Awards" that honor the developers and architects whose work is not only preserving the historic aesthetic of St. Louis but also providing construction jobs the fuel the local economy. Last week at the newly restored Sun Theater, Landmarks had even more good news than usual to share as it recognized an unprecedented number of seventeen properties -- its most ever in a single year.

Continue on for more about the newly renovated Sun Theater and two more "Most Enhanced Winners" that demonstrate historic rehabilitation at its best.

Built in two phases in 1898 and 1903, this red-brick gem with cast-iron and terra-cotta elements silently but proudly holds down just one corner of the Shaw neighborhood. Taking on the airs of a medieval castle, the building completes the rebirth of the intersection of at 39th Street and Shenandoah Avenue as the other three corner buildings are occupied and in good condition.

Who ever would have thought that apartments would have come to this isolated but historic corner of the North Riverfront neighborhood? The St. Louis Stamping Company began constructing its huge complex in 1877. Over the course of the next century, the company and its successors added more buildings. While not particularly ornate or ostentatious, the old factory shows the simple, clean lines of historic industrial architecture in the city. After having sat empty and neglected, it has now found new life as apartments, taking its name from a former owner of the building. Best of all, the redevelopment shows that there can be life east of Broadway in the neighborhoods of old warehouses and mills that once powered St. Louis' industrial might.

Even just a couple of years ago, all hope seemed lost for the last of the great, architecturally stunning theaters of Grand Center. Originally a German-language theater named the Victoria, the business was never truly successful. Eventually the building fell into disrepair and abandonment that lasted for decades. Trees grew from the roof, the interior decayed from mold and water leaks, and the west outer wall began to collapse into a heap of broken bricks. Midtown already had enough theaters, so what possible use could this crumbling landmark provide? Enter the Grand Center Performing Arts Academy, which just so happened to need a performance space for its students. Renovation began last year, and just this month the newly restored theater opened to the public. While a few details were lost to neglect and budgetary considerations, the renovation saved a jewel of St. Louis architecture from becoming just another memory.