Eighty-six years and one month after she was born in St. Louis, author, poet and overall inspiration Maya Angelou has died.

Angelou recently canceled several public appearances citing health reasons. She announced last week that she could not attend the Major League Baseball Beacon Awards, where she was to be honored with the Beacon of Life award for her lifetime of civil-rights work.

Angelou is best known for her powerful 1969 memoir, I Know Why the Caged Bird Sings, one of the most widely admired pieces of modern literature. Angelou made literary history when her memoir became the first nonfiction bestseller by an African American woman.

Angelou made history all her life. At the age of fourteen, she became San Francisco's first African American female cable-car conductor, according to CNN.

Angelou was a three-time Grammy winner and a two-time NAACP Image Awards winner and was nominated for a Pulitzer, a Tony and an Emmy for her role in the television miniseries Roots.

In 1993 President Bill Clinton asked Angelou to recite her poem "On the Pulse of Morning" at his inauguration.

Angelou was also an accomplished dancer, playing a small role in the calypso craze of the 1950s. She sang and wrote almost half of the songs on the record Miss Calypso in 1957 and appeared in the film Calypso Heat Wave.

But Angelou eventually turned to writing and poetry, which, as RFT Music noted on her 84th birthday, made the world a better place:

As talented as she was a singer and dancer, the world is a little better because Angelou decided to focus on her writing, poetry and political activism instead of calypso music. At the very least, a different decision would have forever altered required reading lists for millions of high school students.

Angelou's fame and international renowned earned her a star on the St. Louis Walk of Fame. 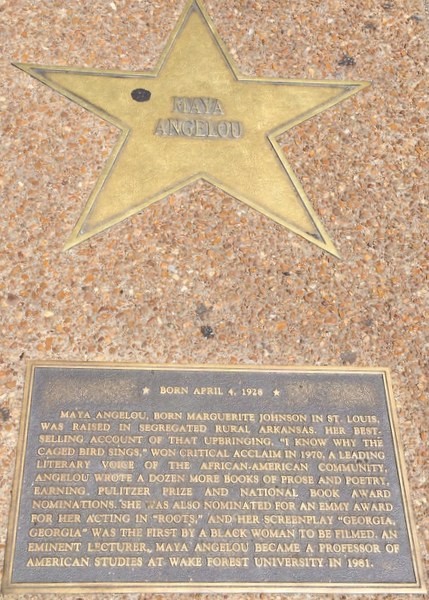 Angelou shared her wise words on Twitter, and her last tweet is a remarkably fitting final message:

Listen to yourself and in that quietude you might hear the voice of God.