Missouri Dominates Humane Society List of 101 of the Worst Puppy Mills in U.S.

They're fed raw cow meet infested with maggots. Their faces are matted with so much feces that they can't see. Their wounds bleed and ooze without any medical treatment. They are left outside on wire floors to freeze to death.

Dogs in Missouri's problem puppy mills are abandoned in abject conditions, even four years after voters approved a stronger law against the sub-par facilities, says the Humane Society of the United States.

The Humane Society released a new report, 101 Puppy Mills: A Sampling of Problem Puppy Mills in the United States, this month. In the report, the group lists some of the worst-offending puppy mills in the country, and Missouri has more problem sites than any other state.

Of the 101 dealers on the Humane Society's list, 22 come from Missouri. Kansas has the second-most problem dealers, with 13 identified on the list.

One of the 22 dealers in the report is Johnny Dake, of J&M Kennels in Stover, Missouri. In January, when the temperatures outside dropped to between 2 and -9 degrees, a U.S. Department of Agriculture inspector investigating a J&M Kennels found a four-week-old Shih tzu puppy dead, frozen solid in an outdoor enclosure. 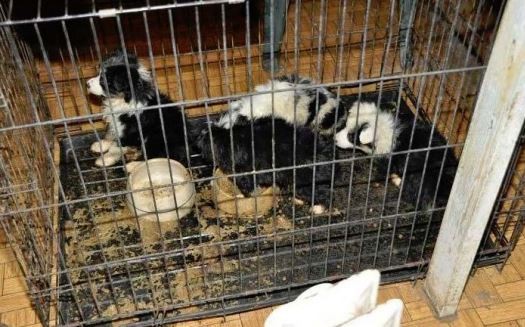 Inside, the picture was even more dire. A female Shih Tzu had an oozing lesion on her paw. A male Shih Tzu had so much feces matted around his eyes that he couldn't see. Two months later, when inspectors returned, the dogs had been kept from water so long that when they finally got it, they drank for more than 60 consecutive seconds.

In Vienna, Missouri, Barbara Newbert admitted to USDA inspectors that she slaughtered cows and fed their raw, rotting meat -- sometimes infested with maggots -- to her dogs at Barb's Pups, according to the report.

Despite warnings in 2011 and 2012, Newbert continued to give rotting meat to her dogs in kennels that also had an open drain with raw sewage and other disease hazards. The USDA inspector noted in May 2013, "Meat and bones that become infested with maggots and begin rotting need to be removed from the animals' pens to reduce disease hazards, insects, pests and odors," according to the report.

The USDA also gave Newbert violations for the numerous dogs with skin problems, open wounds and eye disorders, including one Italian greyhound so thin that its ribcage was visible.

But there's a silver lining hidden among all this animal cruelty. The Humane Society notes that Missouri's new anti-puppy mill law, the Canine Cruelty Prevention Act, could be making a difference. The law is a watered-down version of the "Puppy Mill Cruelty Prevention Act," which voters narrowly passed in 2010.

According to the Humane Society's report:

But that's little consolation to the dogs still living in problem puppy mills, such as "Woofie," a pomeranian inspectors found lying on its side extremely matted with urine and fecal matter and with an eye covered in white-yellow mucus-like discharge.

The Humane Society still doesn't know what happened to Woofie, who was injured by other dogs at Lone Sycamore Kennels in Gorin, Missouri, but wasn't given veterinary care, instead left without food or water for three straight days.