If you ask Wayne Bell, it's never too early to expose your kids to the Tea Party, Ted Cruz or the 9/11 attacks.

Bell's company, Clayton-based Really Big Coloring Books Inc., has pumped out a diverse selection of politicized coloring books for the past five years, and he thinks it's high time schools and human rights groups get in on the propaganda action.

"Our products are very accurate and very pure. We want to be included in the daily lives of children across America," says Bell, who tells Daily RFT he's petitioning the Missouri Department of Education to include his books as standard texts in official school curricula.

It's not just Missouri that Bell is trying to convince: He's sent boxes of coloring books to all 50 states' Departments of Education, the U.S. Department of Education and, according to a press release, the ACLU, the Anti-Defamation League, the Council on American-Islamic Relations and other civil rights groups.

Bell's first big seller was The Tea Party Coloring Book for Kids, which he says has sold by "The 18-wheeler load" since it's release in 2010. Since then, sales and controversy have followed other coloring books that focus on terrorism, the fiscal cliff and Boston Marathon bomber Dzhokhar Tsarnaev -- not to mention a sequel to the original Tea Party-themed hit.

"That book has made us a lot money, I'm not denying that," says Bell of the Tea Party book. "But my goodness, it's created some bad emotions." 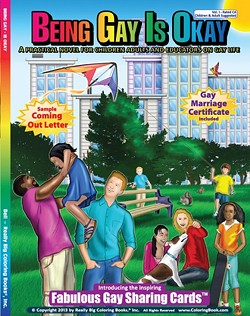 On the other hand, Bell's company is something of an equal-opportunity propagandist: It's published coloring books focused on the Democratic party and Libertarianism. Last year, RBCB put out Being Gay Is Okay, which contains a page of "Fabulous Gay Sharing Cards" and full page spread of a Westboro Baptist Church member holding a "God hates fags" sign.

"We are business-centric. We're not issue-centric," says Bell, who maintains his company does not have a political bias or agenda of its own -- he just wants to sell coloring books to parents who care about their children's education.

"These books matter to people. I know that if people didn't want them they wouldn't buy them, and that's all there is to it. It's a free market world."

Indeed, there are apparently legions of parents willing to politically indoctrinate their kiddos by way of crayons and markers: RBCB's Ted Cruz book is #12 on Amazon.com's list of best-selling coloring books, and the Tea Party series is still the company's most popular item.

However, RBCB's depictions of Muslims and terrorism put Bell on the defensive. In the first 9/11-themed book, kids can color in the bullet shot by a U.S. soldier at Osama Bin Laden, while the Dzhokhar Tsarnaev coloring book includes a message to "the Muslim community at large" demanding Imams establish a holiday of remembrance for victims of "Radical Islamic Jihad," among others things.

"We simply tell the truth, and we do it through parents," Bell says.

We contacted a few of the organizations where Bell claims he sent "Formal requests" for inclusion: An ACLU rep had no idea what we were talking about, while a spokesperson for CAIR called Bell's initiative a "bizarre stunt."