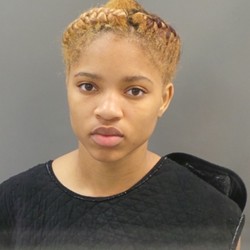 The Circuit Attorney's Office charged a teen with first-degree murder after she stabbed her ex-boyfriend in the chest with a butcher knife, according to police.

Kaila Chambers, seventeen, of the 3600 block of Ohio Avenue, is being held without bond after she turned herself in to St. Louis Metropolitan Police headquarters Tuesday evening.

Police found Chambers' ex-boyfriend -- Thearon Maxey, nineteen, of the 4200 block of Connecticut Street -- unconscious with a puncture wound in his chest on the front porch of an apartment in the 3100 block of Clay Avenue at 9:30 p.m. Sunday. Maxey was pronounced dead at the hospital.

Police investigators said Maxey and Chambers got into a physical altercation, which ended when Chambers stabbed him like a stuck pig.

Chambers then ran from the apartment and was at large until she turned herself in days later.

There have been 49 homicides in St. Louis city in 2014, according to police.

Officers responded to the above location for a "cutting" and upon arrival, located the victim on the front porch unconscious and suffering from a puncture wound to the chest. The victim was conveyed to a hospital and was pronounced deceased. Investigation revealed the victim and the suspect, who is his ex-girlfriend, were involved in a physical altercation when the suspect retrieved a butcher knife and stabbed the victim. The suspect then ran from the apartment and remains at large. The investigation is ongoing.