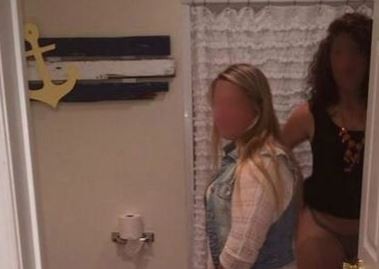 We've got more details on the creepy bathroom photo mistakenly tweeted from an official Southeast Missouri State University Twitter account last Friday. A source tells Daily RFT that the two semi-nude women in the photo are actually student athletes at the college, and the photo itself was taken and publicized without their consent.

In a prepared statement, SEMO Redhawks sports information director Jeff Honza says the investigation into the incident is complete, and the school took "appropriate action" to prevent this kind of thing from happening again. He would not tell Daily RFT who actually sent the offending tweet.

But our source -- the father of one of the women in the photo -- filled us in on the rest of the story. Not surprisingly, he's mad as hell.

"These aren't two random girls, these are two girls at SEMO who were exposed by the athletic department," says the father of one of the students, who asked to remain anonymous to protect the identity of his daughter. "Their response has been less than professional.... They've done nothing to console the girls. Their mantra is, 'It'll go away, it'll die down soon.' That is inexcusable."

He also claims that the person responsible for the tweet was a full-time employee of the athletic department before Honza terminated him this week.

Sean Stevenson, one of Honza's assistants, confirmed that the tweet came "from somebody in our office," but refused to elaborate. When we pressed Honza about the source's allegations, he initially replied that he could not comment on personnel matters and that "further statements regarding any action taken will not be made."

As the Sports Information Director, I am ultimately responsible for the @GoSoutheast Twitter account. We use it as a coverage and promotional tool for our athletic department and teams. There are other staff and students authorized to assist with our social media coverage. We have educated and will continue to educate our staff and students about the appropriate use of social media. I am not going to comment on any other details regarding this incident.

As for the photo itself, the student's father says it was taken the night of May 4 or 5 by another student athlete. He says his daughter and the other woman were preparing for a night out when a thirid student athlete flung open the bathroom door and snapped the photo. The "photographer" later posted the uncensored photo to Twitter, though she apparently deleted it a few days later. But that didn't stop it from spreading around.

"That's how he has the picture," the girl's father continues, referring to the SEMO employee who linked to the photo in a Friday morning tweet. "A week later, for whatever reason, he sends it out. I'm hoping inadvertently."

Hours after the tweet was deleted from the Redhawks' Twitter page, someone presumably tipped off Deadspin, and the two students in the photo are now "humiliated" by the spread of the voyeuristic photo.

The student's father claims a SEMO representative tried to discourage him from going to the press with the fact that the photo was of two student athletes. But he says the damage to his daughter and the other woman had already been done.

"They should have dealt with them like humans, rather than a threat to their logo," he says. "They said they were protecting these girls, but they didn't protect them when it showed up on Deadspin."