How T.J. Oshie Won Over America, Our Hearts and (Maybe) the Cover of EA Sports' NHL 15 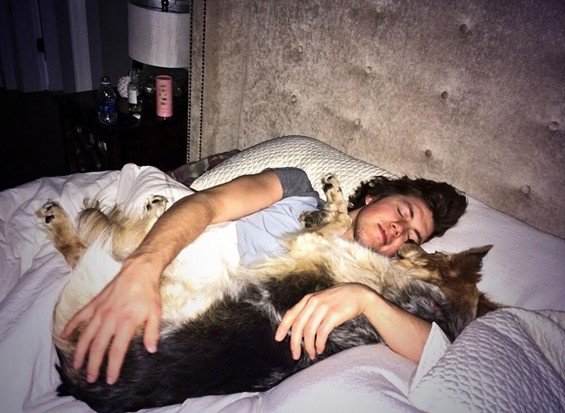 St. Louis fans have loved him for years, but Blues forward T.J. Oshie wasn't exactly a "star" around the rest of the league. Before the end of this season, his best year was 19 goals and 54 points. (He bested that by a few points this year.) And although he brings much more to the Blues than points, it's fancy stats that gets one special attention around the hockey universe.

That all changed ever since Oshie became America's favorite hockey player. And now, he might get one of hockey's greatest -- or at least one of its coolest -- honors: the cover of EA Sports' NHL 15.

The transformation from skilled forward to superstar happened when Team USA played Russia. Due to turmoil in Ukraine, Russia's anti-gay laws and Vladimir Putin's ability to strike fear in Americans' hearts with just the sight of his oft-bare chest, the Cold War had seemed all but reignited, which wasn't helped by the fact the games were being held in Russia. And when Team USA and Team Russia took the ice, there was much more on the line than a gold medal -- at least for the U.S. audience.

See also: Blues' TJ Oshie Will Eat at the Drunken Fish, Wear Flip-Flops on the Ice

So when the game went to a shootout and Oshie, allowed to shoot multiple times due to the Olympic format, literally won the game by himself, he didn't just win a hockey game -- he won the hearts and minds of Americans in what seems to have been a made-for-Holllywood storyline that would have filled theaters during Reagan's 80s: An American boy from a small town took on the Soviets' top guns, the Ovechkins, the Malkins, the Kovalchuks and slayed them all by himself. This was American exceptionalism at its finest.

Team USA beat Russia, but they'd lose to Canada, which meant they could only compete for the bronze medal against a less talented Finnish team. However, the U.S. lost that game badly, 5 to 0, and left the Olympics without a medal.

It wouldn't matter, though, because Oshie beat the Russians. And for this Olympics, beating Russia in Russia was all that really mattered to Americans.

TJ Oshie has now done more for America than Obama

And if America's pride wasn't swelled enough, Oshie, after getting asked what he thought of being thought of as a "hero," he answered Pittsburgh Tribune sports columnist Dejan Kovacevic in the absolute most American way possible.

"The American heroes are wearing camo. That's not me," Oshie said.

American military pride and a defeat of America's new/old arch nemesis. What more could you ask for?

Class. He accomplished what Obama NEVER could. You may be cool,but you'll never be Oshie humiliating Putin, cool. LGB pic.twitter.com/PeZqwJE5Ez

Just had good talk with America's newest hero. Only don't call T.J. Oshie that. "The American heroes are wearing camo. That's not me." #USA

If there's one thing America loves more than heroes, it's heroes holding babies -- and that's what happened when Oshie's fiance, Lauren Cosgrove, gave birth to a baby girl. Not only did America have Oshie, but it was like we were a part of his beautiful family, and that familiarity only grew when it was announced that Oshie's daughter Lyla was born with gastroschisis, a condition in which a person is born with their intestines outside of the body. Lyla is expected to recover and live normally, and the account made for a heartwarming TODAY Show story.

Visit NBCNews.com for breaking news, world news, and news about the economy

Click on the next page for more about the social media campaign to get Oshie on the NHL 15 cover...

An American hero with an adorable baby could only get better with a Stanley Cup. But unfortunately for the Blues, the Blackhawks were too strong a team to get past the first round. Oshie's storybook season came to an end in a disappointing fashion, but America loved him still.

That's why he was nominated to be put on the cover of EA Sports NHL 15 earlier this month. It might have seemed a little strange a year ago for Oshie to be nominated and put within the ranks of stars like star sniper Phil Kessel, former Norris Trophy winner for best defenseman P.K. Subban, and the leading scorer among blueliners Erik Karlsson. But Oshie's heroics and star power might overshadow even Subban, who has wowed the league with his strong performance this playoffs as he's led the Montreal Canadiens to the Eastern Conference finals.

Of course, he is also being helped in a heroic way by the Blues social-media staff. The Blues' Twitter handle has been a nonstop campaign to get Oshie on the NHL 15 cover.

And even Oshie has gotten in on the act big-time with several self-deprecating videos of him "trying-out" for covers of other sports video games.

So far, it's been enough to get Oshie out of the first round, beating the Colorado Avalanche's Matt Duchene. Oshie now faces the Boston Bruins' Patrice Bergeron. And now that the Bruins have been bounced form the playoffs, they might be able to put up a social media campaign, too. But it's unlikely to be as developed and intense as the Blues' efforts.

If Oshie wins this round, he'll go up against whoever wins the duel between Subban and the Los Angeles Kings' Drew Doughty. Both players are no doubt bigger hockey stars than Oshie -- both are among the elite defensemen in the league. But they're Canadian too, and they will likely be no match for T.J. Oshie, America's sweetheart.