Five Things We Learned from Tony La Russa's Commencement Address at Washington U. 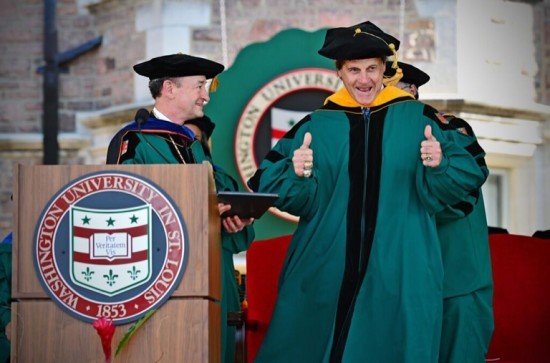 If anyone knows about playing a hard nine to earn respect, it's La Russa. From mediocre player to outstanding manager to a place in the National Baseball Hall of Fame, the former Cardinals skipper has attacked baseball with the mind of a chess player over the years, and it paid off with multiple World Series titles, National League pennants and Manager of the Year awards.

But the advice La Russa offered Friday applies to more than just college graduates or baseball players. Below, check out La Russa's five best nuggets of wisdom that will help anybody grind out a couple of wins and become a "plus" player in the game of life.

1. A love of reading brings adventure.

"One of the first gifts of my life was when my parents introduced to me the love of reading," @TonyLaRussa tells #WUSTL14

La Russa told the graduates that early in his life, his parents instilled in him an adoration for the written word that continues today. And upon meeting a best-selling fiction writer, La Russa learned this:

"He explained to me that in his books, that have been so successful, he concentrated most on the first sentence in the first paragraph and everything flowed from there."

La Russa used that anecdote as the kickoff to his speech, which was assembled with that author's advice in mind. The ensuing address was filled with reflection, stories and a few curveballs, just like many of La Russa's baseball games.

Sports are neat and all, but education is way cooler. That's why when La Russa was looking out at Wash. U.'s 3,000-odd graduates, he said this:

I look at this scene and it's overwhelming, the environment here. You know from my background, I never thought I would say that something is more impressive than opening day with the Cardinals.

La Russa went on to say that though people put great meaning on sports and entertainment, education is what's "real." After calling Washington University one of the finest schools in the country, he told the crowd, "The importance of what you accomplish with your graduation and what you have going forward is more important than a baseball season." Over the years, La Russa has followed his own advice, earning his law degree as his days as a player came to an end.

Lesson: Don't count on your pitching arm or home-run swing to set you up for life.

Three more life-changing lessons on the next page! Continue to page two to see if LaRussa bats the pitcher eighth. 3. "Bad fear" should take a hike.

It's OK to be afraid of something, but you can't let it prevent you from trying new things. To that end, La Russa offered these words:

You feel this anxiety, the expectation of pressure and you decide that you're going to dodge it. And you're just not going to participate. You will regret that the rest of your life and you're going to face a lot of opportunities where there's an uncertain outcome and you've been given the opportunity to try it. Bad fear means you call in sick.

La Russa admitted that he was nervous about accepting the invitation to give the commencement address, and that's why he had been up at 5:30 a.m. making daily changes to his speech. But he was more afraid of failing by not giving the speech at all. We hope he also won't fear the Arizona Diamondbacks' losing record as he takes over as the team's chief baseball officer.

4. Respect yourself. Know yourself.

The world won't just hand you a big-league coaching gig, a stack of hundred-dollar bills or even a job in fast food. La Russa said that to succeed in anything, you've got to know what's inside of yourself:

You act in a way that you earn your own respect. Don't ever fool yourself.

No matter what you attempt, always do your best. La Russa said that by knowing your own values and capabilities, you can always present yourself in a way that makes you proud, and it also will attract those types of employers and friends.

Lesson: Always respect yourself in the morning.

5. Frame of mind is everything.

"We need you. We need you to step forward and be as excellent as you can be," La Russa said. But you can only fulfill your potential if your brain is in the right place:

Your frame of mind is the key to the kingdom. You control your mind. Don't let anybody tell you what's right and wrong.

La Russa supported that thought with an anecdote about the 2011 Cardinals. After losing Game 5 of that year's World Series, the media and many fans assumed that the team was done and wouldn't be able to mount a comeback. But La Russa urged the Redbirds to ignore the distractions, take personal responsibility and continue to put out their best effort. Talent was important to the Cards' ensuing historic Series rally, La Russa said, but focus and grit played even greater roles:

We did it with frame of mind more than anything. Our team came together in a respectful, trusting, caring way. Our guts were outstanding. We refused to give in, refused to give up. That's exactly the message that you need to take forward.

Lesson: No distractions, and no excuses. Get it done.

Thank you @TonyLaRussa for an inspiring commencement address. You knocked it out of the quadrangle! #wustl14

Watch KTVI-TV's report on LaRussa's address at Washington University below, or read the full speech here.