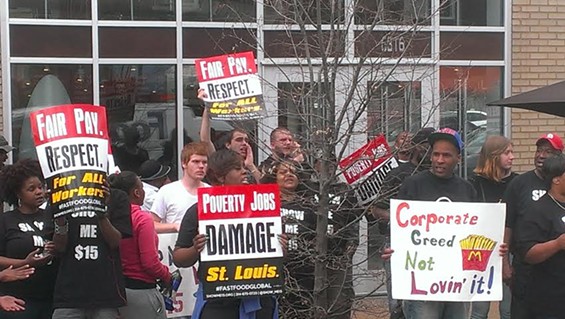 Some people might be tired of hearing about them, but as long as they continue to get paid low wages, fast food workers say they'll keep protesting-- and on Thursday, their actions went global.

Spearheaded by the Service Employees International Union, the largest fast food worker strike ever took place on Thursday, with employees in major cities across the U.S., including St. Louis, walked out on the job to demand a pay raise to $15 an hour.

And according to Show-Me $15, the St. Louis group leading the fast food worker effort here, protests took place across the world, including countries such as Denmark, where fast food workers are unionized and make more than $15 an hour but nonetheless protested to show support for their less-paid American counterparts.

In St. Louis, Show-Me $15 rallies were held in several locations throughout the day, including a McDonald's on Florissant Avenue that had to shut down for breakfast because a majority of its scheduled workers planned to walk out.

Shannon Garth-Rhodes, spokesperson for Show-Me $15, tells Daily RFT store managers were aware of the strike and closed the 24-hour location at 3 a.m. in anticipation of the early morning walk-out. The drive-thru re-opened at 6 a.m. -- apparently staffed only with supervisors and managers -- but the restaurant doors were locked until after the protest.

Garth-Rhodes adds that workers have received positive results from managers after protesting at that McDonald's, including getting raises and promotions to crew trainer positions.

Lashunda Moore, who works at a McDonald's in the Central West End, protested with others in front of a Chipotle on Delmar Boulevard in U. City. She says that the protests are continuing because basic demands are not being met.

"I'm here for all of my colleagues," she tells us. "We work, really, really hard and we don't make enough money to make ends meet."

That's been pretty much the narrative of the fast food worker movement for the past few years. Among the least-paid jobs in America, many workers require and qualify for governmental assistance because their pay is so low, even if they work full-time. Proponents of a wage hike have argued that this is essentially a way of taxpayer-funded corporate welfare, with the American public supplementing corporations that are too cheap to pay its workers a living wage.

Nonetheless, the movement has its share of critics, including those who balk at the notion that a fast food worker should make $15 an hour.

"I think those people probably have never worked in fast food before," Moore says. "This is hard work. We work hard and the companies make billions of dollars. Why can't we make a living wage?"

Other critics say that raising the wage to $15 an hour would raise prices and result in job losses. According to the New York Times, economists differ greatly on what the exact results would be, but price increases would likely be in the 10 to 20 percent range and job losses would hover around 5 percent.

But fast-food worker organizers say that other countries have proven unions and higher wages for fast food workers is a viable concept.

"In St. Louis, we had an increasing number of workers protesting," says Martin Rafanan, community director for Show Me $15. "But more than that, it was significant for the strike actions coordinated across the globe: 150 cities, 30 countries, it just shows that this movement is expanding and it's really fun to have workers who have already achieved forming unions and a living wage in solidarity with workers who haven't achieved it."