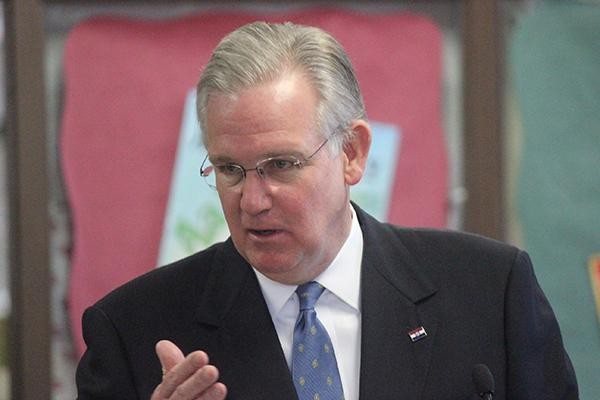 Only one state in the country requires women to wait for three days to have an abortion -- even if they are the victim of sexual assault.

That state is South Dakota, not Missouri. But unless Governor Jay Nixon vetoes a bill the Missouri Legislature sent to his desk this week, Missouri will extend its abortion waiting period to 72 hours from 24 hours.

But Nixon doesn't seem too keen on making Missouri the second state in the U.S. to restrict abortion access for violence victims. Nixon released this statement about the bill Thursday afternoon:

House Bill 1307 will get the same comprehensive review given to all bills that reach my desk. However, it is clear that by failing to include an exception for rape and incest, this extreme proposal would separate Missouri from all but one other state in the nation. I have profound concerns about its impact on women and especially the victims of these heinous crimes.

Utah also requires women to wait 72 hours, but the state makes an exception for rape and incest victims.

Nixon dropped a hint -- albeit an enigmatic one -- about vetoing the bill at a press conference earlier this week:

"I've had pretty consistent positions on this. I think everyone knows, obviously, which way I lean on it," Nixon said, according to the Associated Press.

In 2010 and 2011, he allowed two abortion restriction bills to become law by neither vetoing nor signing them, a middle-of-the-road approach that pro-choice activists call "mixed-choice."

On the 41st anniversary of the Roe v. Wade Supreme Court decision that made abortion legal in America, a University of Missouri student tried to illustrate how extended waiting periods affect women by waiting 72 hours to testify against it.

"I would like you to be able to trust in my opinions," Dina van der Zalm told the legislative committee. "Since this bill...makes the assumption that women are not capable of making difficult decisions without the aid of politicians requiring additional time -- an additional three days -- to really think it through, then I can only assume that you're not going to legitimately listen [to] or value the opinions I would like to state today."

So the big question now is: Will Nixon veto?