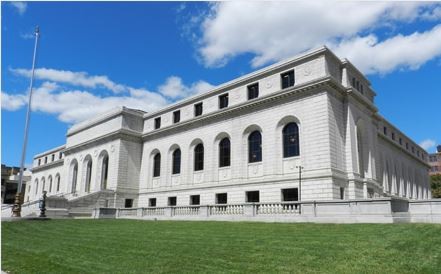 St. Louis Metropolitan Police are still searching for the homeless man who stabbed another homeless man in the neck on the 13th Street steps to downtown's Central Library Wednesday morning.

Police found Jeronnia Graves, 41, whose last known address was in the 4500 block of Davidson Avenue, unconscious and bleeding from the neck at 10:37 a.m. Wednesday. He was taken to the hospital where he was pronounced dead.

Graves was walking with a female acquaintance when the suspect, a 47-year-old man and the woman's former boyfriend, ran up and started arguing with her about their past relationship, police said. Graves stepped in, so the suspect sliced him in the neck and ran away on foot.

The killing sent a wave of shock and sadness through downtown, especially at the Christ Church Cathedral across the street, where church secretary Carol Bledsoe was stabbed in the neck by a mentally ill homeless man twelve years ago.

"Any naivete our community had about serving Christ downtown disappeared that day," Dean Mike Kinman told his congregation. "But that day also was part of one of our finest hours...because what followed was a strong statement by this Cathedral that we would not close our doors and hide behind them but recommit ourselves to healing the very brokenness that took Carol's life."

The church held an evening prayer service in the rain Wednesday night at the site of the stabbing. Kinman says the church, which was put on lockdown after the homicide, will reevaluate security procedures and staffing.

"I pray God will use this tragedy to deepen our commitment to be a catalyst for transformation in this neighborhood, our city and the entire St. Louis region," Kinman wrote to his congregation.

See also: Homelessness in Downtown: Is New Life Evangelistic Center the Problem or the Solution?

Chris Rice, pastor at the New Life Evangelistic Center downtown homeless shelter, said both the victim and the murder suspect were homeless men who spent time in the area. Graves had recently gotten transportation aid from New Life, he told the St. Louis Post-Dispatch.

"People that are homeless are susceptible to acts of violence," Rice said. "There's less protection when a person doesn't have housing."

There have been 48 homicides in St. Louis City in 2014, according to police records.

Officers responded to the above address for a "cutting" and upon arrival, located the victim unconscious on the sidewalk and suffering from a laceration to the neck. The victim was conveyed to a local hospital and pronounced deceased. A female acquaintance reported to officers that she and the victim were walking together when they were approached by the suspect, who is the female's former boyfriend. The female and the suspect began to argue over their past relationship when the victim intervened. An argument ensued between the victim and the suspect, leading to the suspect cutting the victim. The suspect fled on foot and remains at large. The investigation is ongoing.