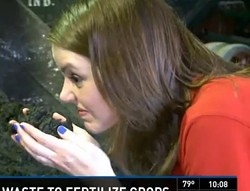 KSDK (Channel 5) reporter Elizabeth Matthews put the rest of St. Louis' journalists to shame yesterday, going way beyond the call duty during a segment about an Illinois farmer who uses mountains of human shit to fertilize his crops.

"It doesn't smell very good," Matthews comments, moments after sticking her bare hands into said shit pile and lifting a glop to her nose for a sniff.

The segment is laughably cringe-worthy, and we can't stop snickering like a bunch of middle-school boys. Bravo, KSDK.

Now, we should clarify that the double-scoop of dump Matthews so lovingly handled did go through some kind of treatment process, but that process obviously didn't do anything for the smell.

Indeed, Matthews' stunt was ludicrously unnecessary, since the entire point of the story was that surrounding farms are suffering from the waves of stench.

Whatever the reason, Matthews' brave reporting speaks for itself. Here's the video.

After the piece aired, one commenter on KSDK.com accused Matthews of having a "sick fetish" for people poop, while on Twitter the reaction was simply one of squeamishness:

KSDK has a storied history when it comes to on-air scatological incidents: In November 2012, a cat made an oopsy on anchor Pat McGonigle's suit during a live newscast. Then a few weeks later McGonigle redeemed himself by licking a piece of dried reindeer poop.

You hear that, Matthews? You need another poop-related story if you're going to challenge KSDK's reigning dung champion. Just remember to wash your hands.