St. Louis Rams Player Posts NSFW Sex Video on Instagram (And No, It's Not Michael Sam) 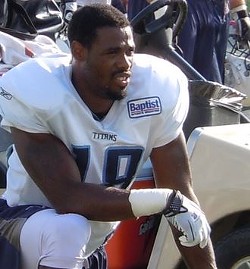 While the media spent all weekend covering Michael Sam's post-NFL draft celebratory kiss with boyfriend Vito Cammisano, another story about a St. Louis Rams player's PDA has received nowhere near the attention it deserves.

In a hilarious social-media blunder, Rams wide receiver Kenny Britt posted a very sexually explicit video on Instagram before quickly and silently taking it down.

In the video, an unidentified woman moans and cheers on her sex partner ("Ay, papi!") until an unidentified man tells her, "That's it, baby." As the woman disembarks, the camera pans around what appears to be a car -- following the tradition of the sex tape, the digital quality is very poor -- before the video ends with a close-up of her nipple.

Tomo News has a snippet of the video, which you can see below. Deadspin, which broke the news about Britt's sex-tigram, has the full video up there.

The camera angle makes it nearly impossible to confirm whether Britt and his wife are the couple in the video, which Britt posted publicly to Instagram.

The video got lost in the shuffle after Sam made NFL history by joining the Rams after coming out as gay in the New York Times. The Rams didn't have a clear answer about how the video ended up on Britt's Instagram.

"We're just looking into things right now," Rams coach Jeff Fisher told the St. Louis Post-Dispatch on Saturday. "We don't know the details; we've been busy. So we're gonna find out what's going on, but I don't have any specifics."

The Rams signed Kenny Britt, formerly of the Tennessee Titans, to a one-year, $1.4 million deal in March.