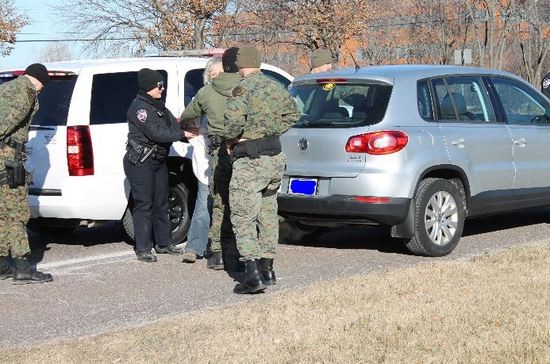 Creve Coeur police chief Glenn Eidman is sick and tired of Monsanto protesters trying to hand out anti-Monsanto literature to people in parked cars in front of the seed giant's headquarters on Olive Boulevard, so he got the city council to pass an ordinance putting an end to that situation right away.

The Creve Coeur City Council unanimously passed the ordinance, which explicitly prohibits people from protesting on the medium. Protesters can still do their thing on the shoulder in front of Monsanto headquarters, but attempting to get attention from both sides of the road will be banned.

Eidman, who personally pushed hard for the ordinance, says it's all about safety and has nothing to do with cracking down on protesters of Creve Coeur's biggest and most important job-creator.

"The Police department has encountered numerous protests in the last year at the Monsanto World Headquarters," Eidman says in a letter to the city council. "One of the problems encountered during these protests have been the protesters themselves who walk out to the median and attempt to demonstrate and pass out brochures to passing motorists. This in itself has been a safety concern, as they are too close to the roadway for vehicles traveling at speeds of up to 40 miles per hour."

Here's a summary of the bill:

But John Chasnoff, a member of the Coalition Against Police Crimes and Repression and former Program Director of the ACLU of Missouri, counters with this: "There is nothing inherently unsafe in being on the median itself. The police already have the authority to enforce safety on the median. In his letter, Chief Eidman is making it clear that the purpose of this amendment is to target Monsanto protestors."

He adds: "Since protestors have the right to pass out fliers when traffic is stopped, not allowing them to stand on the median actually increases safety risks."

Of course, owing to the size and strength of the Monsanto Corporation, some people are suspicious that the Creve Coeur Police Department is cracking down on protesters to please the big seed executives and trample the First Amendment.

The group March Against Monsanto sent out a press release alleging that the ordinance "challenges" the First Amendment and William Smith, a member of the group, told the Post-Dispatch that he is "concerned with people's ability to access public space, and that's what this is an issue of."

But Chasnoff believes that the way the ordinance was written might prevent any strong free-speech challenges.

"Despite the Chief's obvious intent to target protesters, the ordinance is worded in such a way as to appear to have universal application," Chasnoff says. "Police intent to focus on protesters would not in itself be enough to have the law overturned in court."

However, he adds that if it looks like Monsanto protesters are being singled out, then there could be court challenges.

As of now, violation of the ordinance will constitute a C misdemeanor.

See also: The Monsanto Menace: The feds see no evil as a belligerent strongman seeks control of America's food supply