Forklift Flips BMW, Then Drops Dumpster On It

It might take you a couple seconds to notice the weirdness in this grainy photo. Look for the upside-down silver sedan resting in the middle of Broadway and Convention Plaza, right in front of the Edward Jones Dome.

The photo elicited instant confusion on the St. Louis Reddit thread where it was first posted Friday. And though there was one particularly good guess, the real story behind this bizarre accident doesn't involve a garbage truck. It involves a forklift. And dumpster projection.

At 1:21 p.m. on Friday, officers from the St. Louis Metropolitan Police Department arrived at the intersection to find the surreal pairing of a dumpster riding an overturned car -- a BMW, in fact, according to a post from the Redditor who took the photo.

The accident itself occurred when an industrial forklift carrying a dumpster attempted a left turn from Convention Plaza onto Broadway, struck the BMW and flipped the vehicle clean on its back. However, the force of the collision also "projected" the dumpster -- which was filled with scraps of metal -- and it landed right on the Beemer's flat belly.

The forklift driver then released the dumpster, reversed to a safe distance and then presumably waited for the cops, firetruck and ambulance to arrive. The forklift driver was cited for failing to yield while making a left turn, according to a statement from SLMPD spokeswoman Leah Freeman. The driver of the BMW was transported to hospital, and was described as "conscious and breathing."

Here's the full statement from the SLMPD:

Officers responded to a call for an accident at Convention & N. Broadway at 1:21p.m. this afternoon. An industrial-sized forklift carrying a dumpster filled with scraps of metal was traveling westbound on Convention, making a left turn onto Broadway when it struck a vehicle, causing the vehicle to overturn. The dumpster the forklift was carrying was projected onto the overturned vehicle, and the driver of the forklift released the dumpster and backed the forklift away to avoid further potential damage to the vehicle. The driver of the forklift was cited for "Failure to Yield While Making a Left Turn". The driver of the overturned vehicle was conscious and breathing and conveyed to a hospital to be treated. The investigation is ongoing. 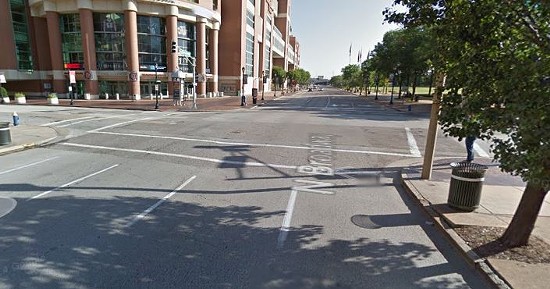