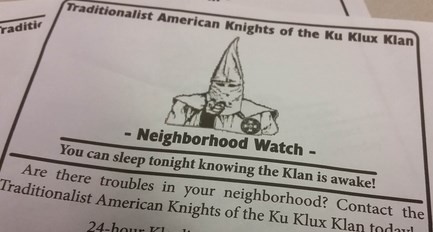 The fliers began turning up Tuesday night, left in plastic bags weighted with rocks near an apartment complex near Fenton in Jefferson County.

"Are there troubles in your neighborhood?" The question is printed beneath an illustration of a hooded figure pointing outward, like a racist version of an Uncle Sam recruiting poster. "Contact the Traditionalist American Knights of the Ku Klux Klan today!"

Yes, like a good neighbor, the Fenton chapter of the Missouri-based KKK offshoot is offering a neighborhood watch program. The group's leader says residents should be grateful for the KKK's community presence.

See also: Racists Call "White Man March" a Success in Missouri Because No One Noticed

The Jefferson County sheriff's office is investigating the fliers, reports the Post-Dispatch, but simply advertising a neighborhood watch service isn't a crime. Speaking from the self-described "Klanline," Ancona tells Daily RFT that members of the Fenton chapter were contacted by residents concerned over drug activity in the area.

"We're not targeting any certain race, we're targeting criminal activity," he says. "When we see it happen we report it to law enforcement."

Ancona declined to provide specifics about the neighborhood watch group or its members, citing his oaths to the KKK. He did say that all members of the patrol would undergo a criminal background check.

The neighborhood watch program isn't unique to Missouri: The exact same fliers turned up in Pennsylvania two weeks ago. The ensuing panic there spawned numerous media reports in which Ancona defended the KKK as just a group of well-meaning white Christian men who take pride in being white Christian men.

"Racism against white male Christians seems to be the only accepted form of racism in America anymore," says Ancona, lamenting the poor public perception of the KKK.

Ancona's insistence that the Traditionalists Knights is not a hate group is kinda-sorta offset by the group's active cross-burning events -- like the one you can watch on his personal YouTube channel -- and the fact that the organization is included by name on the Southern Poverty Law Center's list of active hate groups.

While we had him on the Klanline, we asked Ancona about last month's slayings at two Jewish community centers in Kansas City by Frazier Glenn Miller, a militant racist who had started his own KKK group in North Carolina.

Does that mean Ancona thinks the government was behind the killings?

"Well I can't speak to that," he says. "The guy's a sick individual and if he's guilty I hope he gets the death penalty. He went after innocent people. I don't care what race they are you don't attack innocent people."