Tuesday was shaping up to a be great day for Republican lawmakers. The House had just voted to override Governor Jay Nixon's veto on a massive tax-cut bill, and nothing makes Missouri's conservative-dominated legislature happier than putting the smackdown on the state's Democratic governor.

However, around 10 a.m. hundreds of clergy and demonstrators began crowding into the gallery above the Senate chambers. The organized protest quickly shut down proceedings with chants of "Expand Medicaid!" and "Bring dignity!"

Police released everyone shortly after they cleared the balcony. No charges have yet been filed.

Here's a clip of the protest in action.

Reverend Emmett Baker of Beth-el Baptist Church in St. Louis was present during the protest. He tells Daily RFT that the demonstrators were prepared to be arrested.

"We need health-care expansion," says Baker. "Many of congregations throughout the state are suffering without medical coverage or preventive care, and many have died."

Republicans in the legislature have fought expanding Medicaid over its link to President Barack Obama's Affordable Care Act, among other objections. If the state did expand its Medicaid coverage to the 300,000 or so Missourians who fall under the terms of the new health-care law, then the federal government would foot the entire bill for three years and 90 percent for each year afterward. 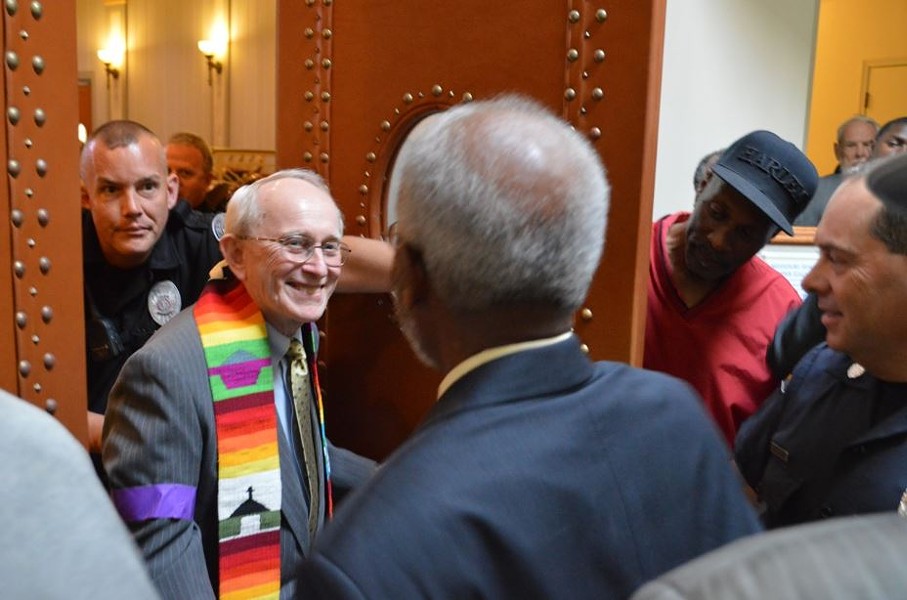 It's not just the godly who are demanding expanded medical coverage in our state. Studies like one from the journal Health Affairs concur that not giving health coverage to poor people makes them sicker: Specifically, the authors estimate that between 7,000 and 17,000 deaths are attributable to those states that have opted out of expanding Medicare coverage.

Missouri Republicans have countered with various concerns, including the expansion's effect on national deficit and whether the federal government would renege on its funding promises.

The demonstrators were not impressed with those arguments, especially considering the House had just cut income taxes by a projected $620 million per year.

"The moment the Missouri legislature passed a bill calling for yet another Kansas-style tax giveaway to millionaires is the moment they forfeited the economic argument," says protester Reverend Susan McCann in press release. "Medicaid expansion is economically smart and morally right. End of story."