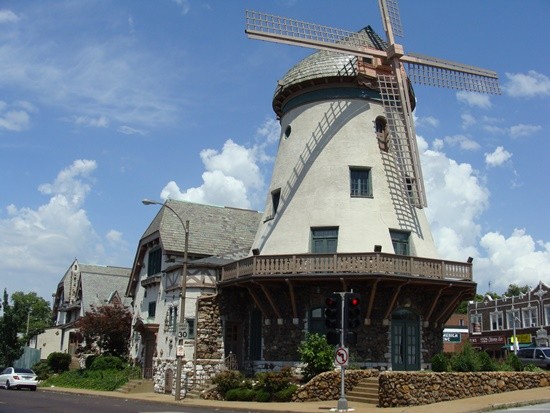 Anheuser-Busch faced a new threat at the dawn of the twentieth century. For decades, the venerable brewery on Pestalozzi Street had battled rival brewers such as the Lemps, but its new enemy didn't brew beer. Quite to the contrary, the Temperance movement sought the annihilation of beer in St. Louis and the entire country. August Busch correctly predicted that the goal of the anti-alcohol zealots, Prohibition, would prove to be the greatest existential threat to the future of his brewery.

For most of the history of America, drinking alcohol in public remained a strictly male pastime. Saloons served as gathering places for men supposedly neglecting their familial duties after work. Busch realized the consumption of alcohol in St. Louis needed a public-relations makeover; ever the hustler, he tackled the challenge with the Busch characteristic need for innovation. First, he began to promote the corporate icon of the Feasting Fox, or Bevo, from traditional German myth. Likewise, also looking back to the Old Country, Anheuser-Busch sought to redefine public drinking in America with a series of "family-friendly" drinking establishments.

Borrowing from German half-timber construction, or fachwerk, the new restaurants sought to not only to project a more wholesome image, but also to embrace Busch's European heritage. The new restaurants abandoned the dark interiors of saloons, substituting them with bright, light-filled interiors and hearty German meals. Placed in strategic locations throughout the rapidly expanding Dutchtown and Bevo neighborhoods, the heart of German St. Louis, Anheuser-Busch began its most daring experiment in community relations. 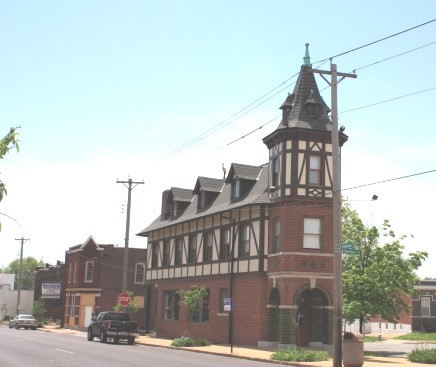 The Stork InnThe first and smallest of the new restaurants built by Busch, the Stork Inn sits on Virginia Avenue in what used to be the bustling commercial strip of Dutchtown south of Meramec Street. Designed by prominent German-American architects Klipstein and Rathmann, the Stork Inn opened in 1910 and functioned as a tavern well into the 1990s. While relatively small, the tavern established the primary features of the Busch PR push. Displaying the characteristics of a traditional German inn, the building contrasted with the American architecture at the intersection. Large windows surrounded the dining room on the first floor, allowing light and judgmental passersby to view the "family-friendly" dining occurring inside. Saved from demolition, the building is now a private residence.

The Feasting FoxThe next Anheuser-Busch restaurant opened in 1914 at the busy intersection of Grand and Meramec, across from a now-lost racing track. Continuing the German architectural tradition, the Feasting Fox embraced traditional half-timber construction. Glazed green brick, a hallmark of A-B restaurants, graced the first floor. The restaurant later closed after decades in business. Faced with demolition and replacement with a Lee's Chicken, Susan and Martin Luepker, long-time Dutchtown residents, stepped in to save the building, reopening it as a restaurant. While the interior had been destroyed, the Luepkers borrowed from old St. Louis institutions to refurnish the Feasting Fox. After centuries of German immigration, it now holds the distinction of being the only German restaurant left in St. Louis. 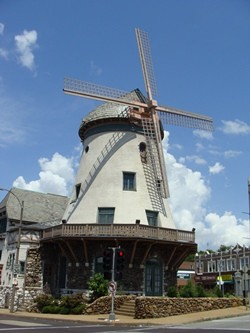 The Bevo Mill The last and most famous A-B restaurant opened in 1918 at the intersection of Morganford and Gravois. Perhaps because of anti-German sentiment in the wake of World War I, the Bevo Mill takes on the appearance of a giant Dutch windmill, anchoring its important intersection with turning blades. August Busch supposedly chose the site because it was halfway between his mansion at Grant's Farm and the brewery. In fact, it is much closer to the brewery than his country estate; nonetheless, he did dine at his private dining room at the Mill.

Ultimately, Anheuser-Busch's restaurants' task of saving beer in the face of Prohibition failed; the Eighteenth Amendment was ratified in 1919, and Prohibition began in earnest in 1920. After Prohibition, new laws forbade A-B from owning its own restaurants, and the brewery sold them off to new management. But these proud reminders of St. Louis' brewing heritage remain to remind us of August Busch's remarkable and innovative role in the history of beer in America.