Teens Charged With Murder After Fistfight Turns into Deadly Shooting (Homicide No. 44)

Two seventeen-year-olds face murder and armed criminal action charges after a four-woman fistfight escalated into the shooting death of Alicia Miller, 26, in the Wells-Goodfellow neighborhood.

Darius Hamell, seventeen, of the 5900 block of Wabada Avenue, was charged with first-degree murder and armed criminal action Monday, and a judge ordered a $1 million cash-only bond. Hamell is in custody in Indiana for his involvement in an unrelated shooting after a fight at an apartment complex.

The Circuit Attorney's Office also charged Lonisha Cummings, seventeen, of the 5300 block of Minerva Avenue, with second-degree murder and armed criminal action. She is held in jail without bond.

St. Louis police say Cummings and two other women got into a fight with Miller, of the 6400 block of Leschen Avenue, around 4:30 p.m. on March 21. Hammell was holding a gun he'd given Cummings, and during the fight, he pulled it out and shot at Miller. 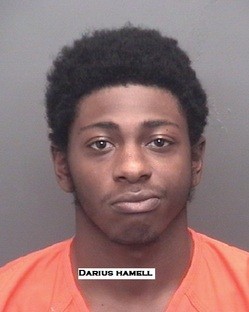 Hammell then gave the gun to Cummings, who shot at Miller while she ran away, police told the St. Louis Post-Dispatch.

Miller died three weeks later, on April 17, from gunshot wounds to the buttocks and thigh. Two other women were charged in connection with the fight. Briona Zimmerman, 22, of the 8000 block of Aline, faces two counts of first-degree assault charges and two counts of armed criminal action and is held on a $100,000 cash-only bond. Jamie Harris, 27, of the 5000 block of Claxton, faces second-degree assault charges and has a $25,000 bond.

So far in 2014, there have been 44 homicides in the city of St. Louis, according to police.

Here's the full report from police. Police reclassified the incident as a homicide after Miller died:

Officers responded to a call for a "shooting" and upon arrival, located the victim on a vacant lot suffering from gunshot wounds to the buttocks and thigh. The victim was conveyed to a hospital where she was listed in critical/unstable condition. Investigation revealed the victim was involved in a fight with several other females when a black male suspect fired shots at the victim. The investigation is ongoing.