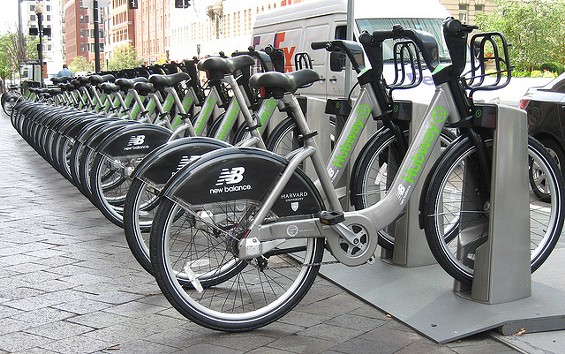 Imagine checking out a bicycle like you would a library book, riding it for half an hour or so -- from work to the Metrolink stop, or from class back home -- and checking it back in when you arrive.

But first, they'll need your help to answer this basic question: Where should St. Louis put stations for shared bikes?

"We're really hoping to hear from people on what they hope to get out of a bike share in St. Louis," says Elizabeth Simons of Great Rivers Greenway, which partnered with the city, the county and Metro to commission a bike share feasibility study for the region.

Dozens of would-be riders have already submitted potential locations for shared-bike stations -- from as far north as I-270 and Riverview Drive all the way south at Gravois Road and the River Des Peres -- using the study's specially-designed map. So far, most suggestions seem to be in the central corridor or in south city.

Simons says ideal locations for bike share stations would be near public transit stops, such as a Metrolink station or major bus route, in a neighborhood with a variety of nearby destinations, including offices, restaurants, shops and houses or apartments.

"Metrolink can get you a large part of the way to work or to where you live, but usually, that last mile is an issue," Simons tells Daily RFT. "That's how a bike share system could help."

Here is a sneak peak of a #BikeShare bike. Stop by our booth @stlouisearthday and see it yourself! http://t.co/vuCpmRscI2

If you suggest a spot for a bike share station, don't forget to plead your case in the comments. One person suggested building a bike station at Cleveland and Thurman avenues in the Shaw neighborhood, commenting, "We need more stuff like this in the heart of residential areas, not just out at the fringes. Let me walk a block, grab a bike and run to the store."