After ending a seventeen-day sit-in to protest Washington University's close ties to coal giant Peabody Energy, seven students were arrested Friday while attempting to enter a board of trustees meeting and ask Peabody's chairman and CEO Greg Boyce to resign from the school's board.

The seven students were part of a 100-person protest outside the meeting, where students and non-student activists sang, chanted and locked arms against police in an effort to convince the university to sever ties with Peabody, the world's largest private-sector coal company, which is based in St. Louis.

"I am proud to be standing up to Peabody Coal today," says Julia Ho, one of the students who was arrested. "For too long, fossil fuel corporations have used their partnerships with universities to legitimize their destructive and unjust business practices. That must stop. Students across the country are fighting back against the fossil fuel industry and will keep fighting back until until fossil fuels are off of our campuses."

University officials told students they'd be arrested if they tried to enter the meeting.

"We needed to take our fight directly to Boyce and to Peabody," says Caroline Burney, 22, an organizer behind the student protests and a senior studying environmental policy and anthropology. "We knew it was a possibility that they would arrest students, but as students at this university, we think we should have access to university buildings."

Update: Students were arrested by police for taking a step toward the building where the board of trustees was meeting. Burney says the group was still feet away from the door when police stepped in. 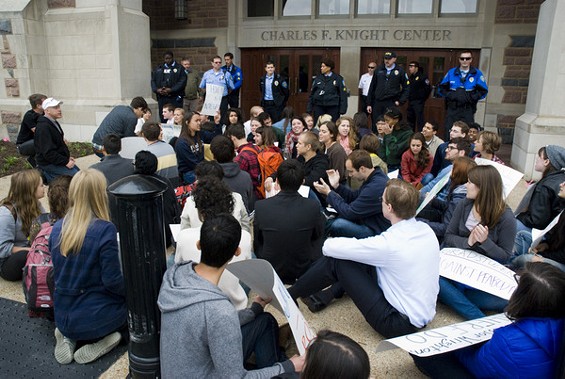 The Washington University Police Department charged the seven students with trespassing and peace disturbance. Police brought but didn't wear riot gear as they arrested students, according to the St. Louis Post-Dispatch.

"We thought the university police would be more reluctant to arrest students," Burney tells Daily RFT. "They came out in full force."

As part of last month's sit-in, the students demanded that the university remove Boyce from the board of trustees and that Chancellor Mark Wrighton attend a community-organized tour of Peabody extraction zones and issue a public statement about his experience. Wrighton refused but told media he welcomes a "constructive and respectful dialogue" with demonstrators.

The protesters, called Students Against Peabody, are aligned with Missourians Organizing for Reform and Empowerment, the group that stumped for a ballot initiative in St. Louis to ban fossil fuel corporations from receiving tax incentives; a judge took the measure off the ballot after a lawsuit.

Students say that's only one of the reasons they're protesting against the school's connections with Peabody. Student organizers list several motivations, including Peabody's contribution to global carbon emissions, participation in the American Legislative Exchange Council and the marginalization of indigenous and rural communities in places including Black Mesa, Arizona and Rocky Branch, Illinois. 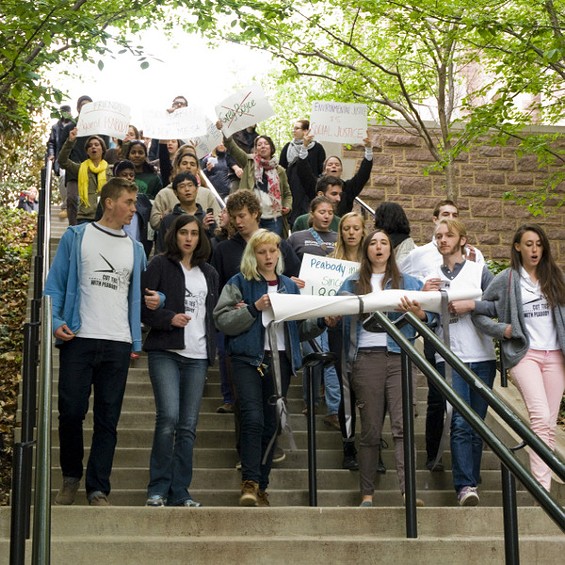 "As long as Greg Boyce sits on our Board of Trustees, the school will never re-name the Consortium for Clean Coal Utilization, take a stance on Peabody's continuous record of social injustices, or meet any of our other demands," says Caitlin Lee, one of the Students Against Peabody organizers.

The arrest came a day after a Harvard University undergraduate student was arrested for blocking a door to a university building as part of an environmental protest.