Comic books have seen a resurgence in popularity in recent years, thanks to film series revolving around The Avengers, X-Men and Superman. But with hobby reading in general going down nationwide, how can comic book shops ensure that younger generations will be interested in the adventures of Batman or Archie?

That's where Free Comic Book Day comes in. Held the first Saturday each May (that's tomorrow!), the national holiday for four-color connoisseurs started in 2002 to expand comic book awareness and appreciation. Now, though, it's grown into a full-fledged carnival, with shops all over the country giving away thousands of free books and hosting fun events to entice both new readers and longtime devotees. This year, retailers will be offering up to 60 official Free Comic Book titles, some of which are kicking off new series or are destined to become collectors' items.

It's kind of awesome, and if you don't believe us, you can ask Marvel Comics god Stan Lee:

As a haven for comic book shops and as one of the nation's most literate cities, St. Louis certainly will make a bold Free Comic Book Day showing this weekend. We chatted with several area stores about how they'll be celebrating the holiday, their tips for enjoying the event and which titles you'll need to arrive early to nab.

You don't need to know the Green Lantern oath to enjoy Free Comic Book Day. When Free Comic Book Day first started well over a decade ago, old comics were repackaged and given away as freebies, and readers needed to be on top of complicated story arcs to enjoy the books they picked up. Now, though, FCBD welcomes new readers, enticing them with new titles and familiar characters.

"Most of the publishers' offerings are readily accessible to folks who don't have an extensive background in comic book reading. This year, especially, a large portion of the selections are quite kid-friendly," says Steve Koch, owner of Comic Headquarters in Oakville. "At the same time, some publishers -- DC and Marvel, particularly -- will often have an entry which kicks off a new ongoing storyline that appeals to existing readers who want to make sure to get the first 'chapter.' The event, therefore, really functions well for everybody.

"I like that people who don't visit regularly are coming in with family and friends to introduce them to comics," says Christina Steenz Stewart, assistant manager for Star Clipper in University City. "This is a huge event that everyone's going to go to plus it's free, so I feel like we get a lot of new customers from Free Comic Book Day." 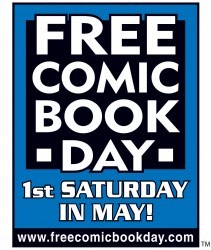 Superheroes still pack a punch. Shop managers tell Daily RFT that there are many great books to pick up during FCBD this year, but they're predicting that a few titles will go particularly quickly.

"We're hearing that a lot of people are excited about the Batman Beyond/Futures End title," says Josh Soto, assistant manager of the Fantasy Shop in St. Charles. "That's because bringing the old cartoon into the comic book universe is really exciting for a lot of people, especially those in the their 20s who grew up with it."

"The free Guardians of the Galaxy comic is going to be tops because this year, the movie comes out," Stewart says. "A lot of people are going to want to know what the deal is on that, because Guardians isn't exactly a popular team for Marvel, like the Avengers are. I think that one will go really really fast."

Continue for a message from Reading Rainbow's LeVar Burton and tips on surviving FCBD.

Want your kid to read more? Bring her to Free Comic Book Day. A spoonful of sugar makes the medicine go down, and there's no sweeter drug than comic books when it comes to getting a child to enjoy reading for pleasure. Free Comic Book Day entices kids with cool characters and flashy colors and then ropes them in with age-appropriate fun.

"Comics are a natural positive augment in getting kids to read more," Koch says. "While the comics certainly still are collectible, the focus has largely shifted to letting people see that many comics are extremely well-written and entertaining. They really are for folks of all ages.

"There are few things more enjoyable than seeing the wonder in a young child's face when they discover this world of imagination," he concludes.

LeVar Burton of Reading Rainbow is totally down with that:

But FCBD isn't just for kids.

Nostalgia looms big in the comics world, with recent titles like Saved by the Bell or Teenage Mutant Ninja Turtles becoming popular. And sure, children seem to dig them, but it's Mom and Dad who are most excited about helping their kids sound out "cow-a-bung-a" while reading.

"You've got the 1980s families now with their kids, and the parents are looking for Thundercats and He-Man," says Mark Farace, owner of Mo's Comics/All-American Collectibles in South City. "As they get older, men especially are looking to go back to their youth, so you'll see them bringing their kids here."

A lot goes into making FCBD a success.

Shops start planning for FCBD months in advance, sometimes considering all the puzzle pieces as much as six months to a year out. To many customers' surprise, retailers pay for the books that readers receive for free. Managers also consider storage limits, shipping delays, store layout and more.

"It's a lot of work, and it's almost like a release once the day actually happens," says Mike Byrd, assistant manager of Heroic Adventures in Edwardsville. "We kind of redesign how our our store is set up because we're going to have a large crowd of people all day long. We reorganize everything so it's as accessible as we can possibly make it."

"[Setting up before FCBD on] Friday night is bananas," adds Stewart. "We usually get volunteers in to help us -- that's how many comics we get." 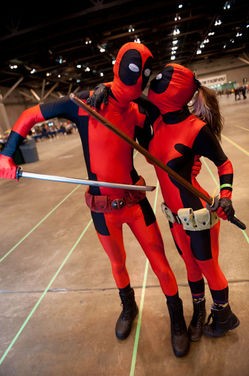 Creating a community around comic books is what matters on FCBD.

"I love the joy it brings to people," Soto says. "This year, we're doing bags with one of everything from Free Comic Book Day for some of our special customers. We want to thank them for all the support they give us."

"On Free Comic Book Day, people are getting books and really even reading books for the first time and not really understanding what it is," Byrd adds. "You're able to put that into their hands and get them going on it."

Plan, plan, plan. Some St. Louis comic book shops are going all out with artist signings, face painting, cosplayers and musical acts. Others are keeping things low-key with sales, a few giveaways and one-on-one time with knowledgeable shop owners. Free Comic Book Day fans appreciate the variety and often hit several stores before heading home to read their goodies. Last year, we gave you a n00b guide to Free Comic Book Day, but our shopkeepers have a few additional tips to help readers experience a full day of FCBD celebrations.

Whatever you do, just head to a store and see what's up.

"What do you possibly have to lose? I'm betting almost everyone can find a book that might surprise them as to how much they might enjoy it," Koch claims.