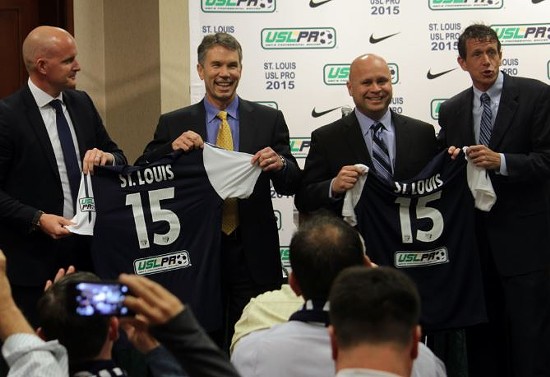 St. Louis has long carried the odd distinction of being a "Soccer Town" without a professional soccer team.

That changed yesterday when the St. Louis Scott Gallagher Soccer Club triumphantly announced it had been granted an expansion team by the United Soccer League. The city's USL Pro debut is set for the 2015 season, and though the team doesn't yet have a name, mascot, jersey or logo, the news elated St. Louis' long-suffering futbol faithful.

"We are fortunate indeed to again be part of the national landscape," says soccer broadcaster Bill McDermott, who delivered the opening remarks at yesterday's press conference. "We owe it to our predecessors to keep St. Louis soccer significant."

The team will play its home games in the 5,000-seat main field of St. Louis Soccer Park in Fenton. Headed by SLSG youth program director Dale Schilly, the team's staff is just starting work on recruitment and scouting.

It's a bit of a deja vu moment for coach Schilly; he previously coached the sole disappointing season of St. Louis' last attempt at a professional soccer team in 2010.

But if the massive local turnout to exhibition matches at Busch Stadium and Edward Jones Dome last year are any indication, the city is ready to renew and revitalize its deep historical ties to the sport. 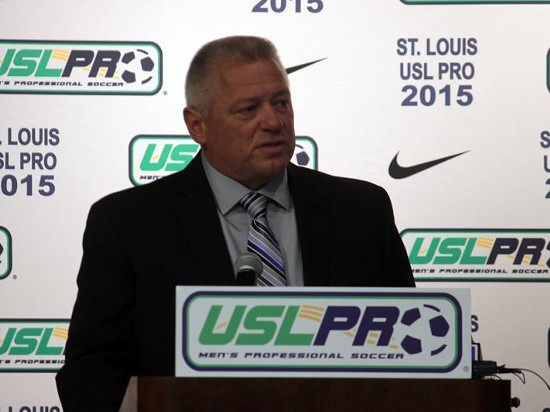 "There was a craze going on," says Schilly, recalling the heyday of St. Louis' amateur indoor soccer scene in the 1970s. "People couldn't wait to get to the games, and to recreate that again in the outdoor arena? That would be amazing."

Positioned as the third tier of U.S. professional soccer, the USL Pro league bears resemblance to triple-A baseball in that it acts as a recruiting pool for MLS. Indeed, the two leagues are increasingly intertwined as other MLS teams foster their own affiliated USL Pro clubs.

Currently, USL Pro has fourteen teams, and by 2015 St. Louis will enter the league along with two other expansion clubs in Colorado and Tulsa.

"This is a great first step," says Mitch Morice, co-founder of the St. Louiligans, the impassioned soccer fan club whose distinctive green-and-white is a common sight at St. Louis area soccer matches.

"It's important for St. Louis to prove ourselves at a lower level instead of just jumping to MLS," Morice continues. "It'll be an opportunity for fans to show they're ready for soccer."

Though SLSG ultimately sealed the deal, they weren't the only party pushing for a USL Pro team in St. Louis. In February, Daily RFT reported that Tony Glavin, owner and coach of the St. Louis Lions, and Andrew Haines, owner of the St. Louis Ambush, were also in talks to bring just such a team for the 2015 season.

"St. Louis is such an important market in American soccer. It has been and it still is," says USL Pro president Tim Holt. "Soccer may have been in some state of hibernation here for the past coupe of decades. That's going to change."