Two north St. Louis men face charges for armed robbery and resisting arrest after holding up a McDonald's Wednesday night and running from the cops, according to the St. Louis Metropolitan Police. Officers shot one of the suspects when he refused to lower his weapon after a foot chase, according to the police report.

Deonte Phillips, 21, of the 2100 block of Geyer Road, was still in the hospital in serious condition Thursday after being shot by an officer with more than five years on the force. Phillips was charged with first-degree robbery, armed criminal action, unlawful use of a weapon and resisting/interfering with a felony arrest.

The Circuit Attorney's Office also charged Johnny Phillips, 22, of the 2500 block of Oepts Avenue in Jennings, Missouri, with first-degree robbery, armed criminal action and resisting arrest in connection with the robbery. Both men are being held on a $500,000 cash-only bond.

According to the police report, the McDonald's restaurant at 4979 Natural Bridge Avenue reported a robbery around 8:22 p.m. Wednesday night. Witnesses told police the robber jumped over a fence behind the business armed with a gun. 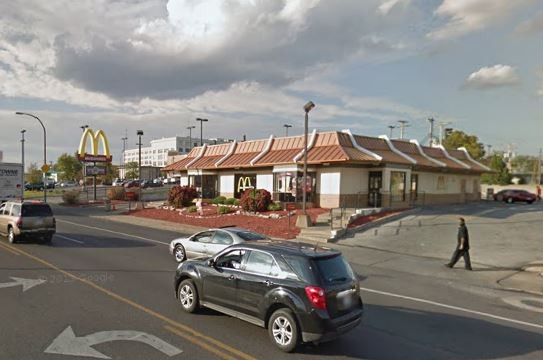 When police arrived at the block behind the McDonald's, officers saw a man, later identified as Deonte Phillips, who matched the description of the suspect, holding a gun and running west on San Francisco Avenue past marked police cars. The officers were chasing him on foot when Phillips turned, pointed his gun toward officers and refused to drop it, according to police.

The officers shot Phillips, who was taken to the hospital and listed in serious but stable condition. Police recovered the gun, two additional fully-loaded magazines and money taken in the robbery.

The officers were not injured.

Meanwhile, another police officer near the robbery saw a grey car fleeing west from San Francisco Avenue onto North Kingshighway Boulevard, according to the police report. The officer stopped the car and exited his patrol vehicle to approach, but the driver quickly sped off.

The officer believed the car was connected to the robbery and officer-involved shooting, according to the police report, so he pursued the car until it crashed at Arlington and West Florissant avenues.

The driver, later identified as Johnny Phillips, abandoned the car but was taken into custody shortly after.

The officers involved have been put on administrative leave, as per department policy. All three officers are 31-year-old men. Two officers have five years of experience with the St. Louis Police, and one officer has eight years.

The police report does not identify which officer or officers shot Deonte Phillips.

Officers were monitoring a call for a "Hold-Up in Progress" at the McDonalds located at 4979 Natural Bridge. A description was broadcast regarding the suspect who was last seen jumping over a fence behind the business and running towards San Francisco armed with a gun. The officers responded to the 4900 block of San Francisco, where they encountered a subject fitting the description previously broadcast running west on San Francisco with a gun in his hand. As Suspect #1 ran past the marked police vehicles, the officers exited and pursued Suspect #1 on foot. Suspect #1 then turned in the direction of the officers with the firearm in hand and the officers demanded Suspect #1 drop his gun and he refused. Fearing for their safety, the officers discharged their department-issued weapons, striking Suspect #1. Suspect #1 dropped the weapon and was secured by officers. Suspect #1 was conveyed to a hospital and listed in serious/stable condition. The weapon, two additional fully loaded magazines and currency taken in the robbery were recovered. The officers were not injured. As is department policy, the officers have been placed on administrative leave.

A responding officer responded to the area of Kingshighway and San Francisco after hearing the dispatch of the incident. Upon arrival, he observed a grey vehicle fleeing west from San Francisco onto N. Kingshighway. The vehicle stopped, but after the officer exited his marked police vehicle, the suspect vehicle accelerated at a high rate of speed north on Kingshighway. Believing this vehicle was connected to the robbery and officer-involved shooting, the officer pursued the vehicle, which continued to flee until crashing at Arlington. Suspect #2 then abandoned the vehicle. Suspect #2 was taken into custody a short time later. The investigation is ongoing.