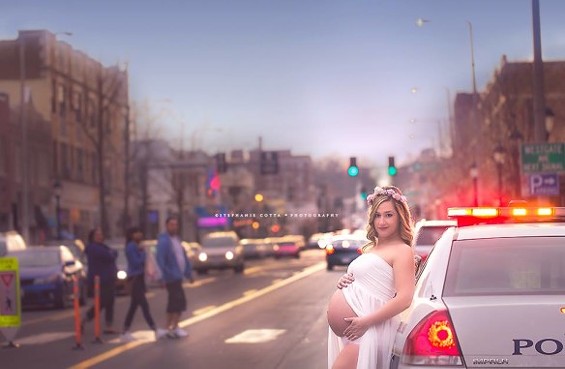 You never know what you'll see in the Delmar Loop.

Among the buskers, gutter punks, student groups and activists with petitions populating one of the "Ten Great Streets America", there's a new character on the scene: the bare-bellied mom-to-be.

"I was a little apprehensive," Itzkowitz admits to Daily RFT. "People were very curious. People asked, 'Oh, is it your wedding day?' When I dropped the gown and my belly came out, they were like, 'Oh.' There was definitely that shock value."

See also: St. Louis' Decay and Rebirth: Before and After Photos

Itzkowitz says she felt embraced by people on the Loop as she sauntered back and forth across the crosswalk, occasionally pausing next to a street mural or cop car while her sister snapped away. She posted the photos on her healthy living blog, Itz Linz.

"Everyone was turning their heads," Itzkowitz remembers. "It was a very cool feeling to know just how open everyone is in the Loop with how diverse it is. It's easier to do it there than, say, Chesterfield or Clayton."

Update: Itzkowitz says her sister Cotta, a family photographer who won the 2010 Nickelodeon's Parents' Picks Award was the one who suggested taking photos in the Loop.

Itzkowitz says she agreed because after struggling with infertility, she was ready to show off her big belly.

"In the past, women were wearing mumus and covering up their bellies," she says. "I was all about showing it off."

We have to wonder: Will we see more preggers ladies sashaying down Delmar this summer? Is urban maternity photography a new trend?