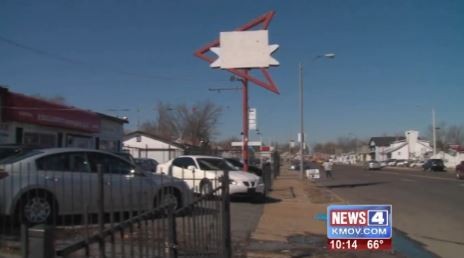 Tadarrell Qualls is tired of being portrayed as the bad guy. A north city auto broker, Qualls is being sued by the state for allegedly selling pre-owned vehicles without titles, leaving customers with a hefty bill for cars they can't legally register or drive.

We first learned about Qualls when KMOV aired the latest in a string of reports targeting his previous dealership, Top Quality Auto, and his current consulting business. The report captured Qualls' wife in a magnificently goofy meltdown in which she clearly had no intention of playing a round of "gotcha!" with KMOV reporter Chris Nagus.

After more than a year chasing this story, KMOV has never managed to interview Qualls. We got in touch with him yesterday. He tells Daily RFT that KMOV and Attorney General Chris Koster are being manipulated by a few scheming customers trying shake down his legitimate business.

Qualls concedes that one of the aggrieved customers featured in a 2013 KMOV report, Patresa Parker, had a legitimate beef with him. She bought her car back in 2010, when the poor economy had put Qualls in a bind with the company that supplied his inventory of vehicles.

That was the only time, he insists, where he didn't give a customer the title on time.

"I gave her dealer plates to let her ride on, we made amends with her and we hired an attorney to help get her the title," says Qualls.

At the time, he claims, Parker had shown understanding about the delay since she was having trouble paying taxes on the car. But Qualls says KMOV turned that one misstep into a witch-hunt.

"KMOV piggybacked every story back to that one issue, and people seem like they're coming out of the woodwork trying to take a claim against the company," he says. "They're promoting it and putting it out there like customers aren't getting their titles."

But it's not just KMOV making these claims. In March, the state filed a lawsuit against Qualls for failing deliver titles to customers, among other things. The suit lists nine plaintiffs.

"I got files on each case, on each situation, and documentation where the customer signed they received everything at the time of sale and that they were satisfied with the car," Qualls says.

Parker is listed as one of the nine plaintiffs in the state's suit, but Qualls says the other eight are just cash-strapped opportunists trying to scam him. He also disputes the dollar amounts listed in the suit.

"We serve an under-served market, individuals with 400 and 500 credit scores. With these people there's a lack of credibility. They aren't sensitive or understanding of what it takes to get these deals funded. There's a lot of accountability issues," he says.

"We have a lot of people, I'd say 65 percent, that go through secondary financing," he continues, referencing a financial practice that resembles the sub-prime lending strategies that melted the U.S. economy back in 2008. His customer base is made of people who are already in money trouble. Consultants like Qualls puts those people into cars by partnering with financing companies that offset the risk with high interest rates.

The bottom line, Qualls says, is that his disgruntled customers are responsible for screwing up the deals themselves.

"They make spontaneous purchases, and sometimes people jump out there and take a payment that they can't afford. Once we get the deal funded, these people can't pay their sales tax and they ride around with fake temp tags for a year and never come get their title."

As it stands, the state's civil suit against Qualls is shaping up to be a nasty back-and-forth brouhaha, with both sides -- the used car salesman and his customers -- accusing the other of exploitation, shady maneuvering and fraud.