This Guy Hacked the St. Louis Post-Dispatch Paywall in Ten Minutes, And You Can, Too

But Miklasz's column, like much of what the Post-Dispatch calls "insider sports coverage," is now an stlEXTRA!, or premium content protected behind a paywall for subscribers. Only readers who pay $13.50 in monthly subscription fees get access to the clumsily named stlEXTRA! content, such as special columns, business market wraps and even online quizzes.

Flynn is not really one to take no for an answer. In less than ten minutes, he published an HTML script that would allow any Post-Dispatch reader to access all the content, even stlEXTRA! stories, without paying a dime.

"It's pretty trivial," Flynn says of the browser user script he wrote. Flynn noticed the site's developers were tagging stories as either "free" or "premium" content for subscribers only. His script changes all that, causing the site to read every story as free, even if it originally wasn't.

(Find out how to install this on your browser here.)

Here's how he did it, according to Flynn's blog, the Angry Truth:

I took a quick look at the page source and found a meta tag named "__sync_contentCategory" it was set to "premium" on the article I wanted to read, but set to "free" on the article explaining their new paywall. Luckily their site is still slow as hell with all the ads and stuff they are loading, so if I just manage to change that meta tag to "free" on every article I read before their redirect script (probably loading on DOM ready) fires, will that short circuit the whole system? Yup.

Flynn admits he feels a little guilty for finding a way around the rules. After years as the smart and snarky voice behind Punching Kitty, St. Louis' answer to Gawker gossip, Flynn says he knows what the the hardworking journos at the Post-Dispatch are up against. A new report this week says print ad revenues are now the lowest they've been for newspapers since 1950. 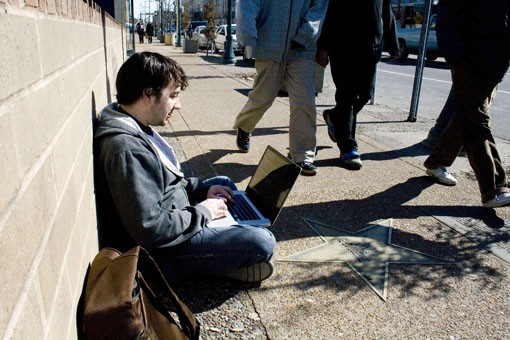 "I feel bad in some regards, but paywalls aren't a good idea," Flynn says. "And they didn't do theirs very well."

Still, Flynn says he doesn't feel that bad. After all, not all of the P-D's subscribers are tech-savvy enough to use the work-around.

"They could just not care," Flynn says of the Post-Dispatch. "I very much doubt that they will see a lot of 'digital subscriptions,' and those that would be interested aren't the type to know what a user script is or follow me on Twitter."

And for all the other Bernie Miklasz fans out there, don't worry. Not all of his columns are "premium" content. But the paywall debate isn't fazing this columnist.

@thebluick @mikeflynn_ I don't care what people do. I'll continue to provide more content than sports columnist in America.

@thebluick @mikeflynn_ How the company chooses to display it is their call, not mine.